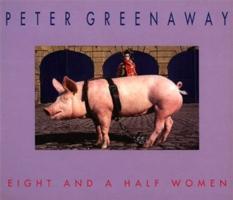 Peter Greenaway: Eight and a Half Women

Eight and a Half Women accompanies Peter Greenaway's latest movie of that name (referring to Fellini's film), to be released in 1999. A laconic black comedy, the film examines the age-old phenomenon of male sexual fantasy. Its characteristically surreal and Byzantine story involves a rich Swiss businessman who owns Japanese pachinko parlours, and whose son lives in Kyoto and is fascinated by earthquakes. In grieving upon the death of his wife, the father withdraws and his son attempts to console him -- and to reawaken his interest in other women. The two create their own domestic bordello, and the story ends in a surprising twist. This volume is part of a series of books dedicated to the scripts of Peter Greenaway and are especially useful For anyone interested in penetrating deeper into the universe created by the filmmaker before making the film. Revealing a talent for creating images which are later to be turned into film, these books can also be considered an original literary work by one of the 20th century's most original artists.