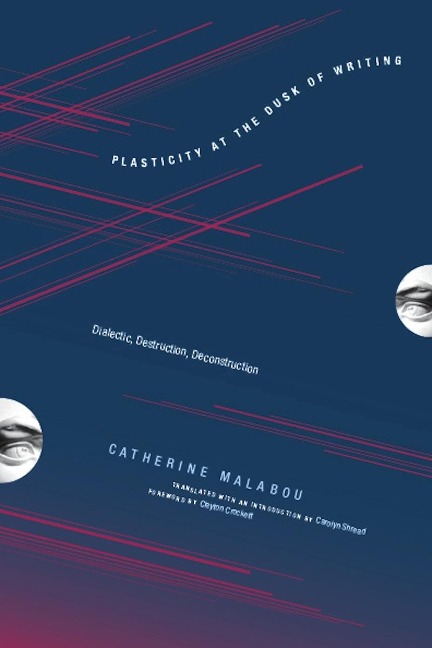 Plasticity at the Dusk of Writing

A former student and collaborator of Jacques Derrida, Catherine Malabou has generated worldwide acclaim for her progressive rethinking of postmodern, Derridean critique. Building on her notion of plasticity, a term she originally borrowed from Hegel's Phenomenology of Spirit and adapted to a reading of Hegel's own work, Malabou transforms our understanding of the political and the religious, revealing the malleable nature of these concepts and their openness to positive reinvention.

In French to describe something as plastic is to recognize both its flexibility and its explosiveness-its capacity not only to receive and give form but to annihilate it as well. After defining plasticity in terms of its active embodiments, Malabou applies the notion to the work of Hegel, Heidegger, Levinas, Levi-Strauss, Freud, and Derrida, recasting their writing as a process of change (rather than mediation) between dialectic and deconstruction. Malabou contrasts plasticity against the graphic element of Derrida's work and the notion of trace in Derrida and Levinas, arguing that plasticity refers to sculptural forms that accommodate or express a trace. She then expands this analysis to the realms of politics and religion, claiming, against Derrida, that "the event" of justice and democracy is not fixed but susceptible to human action.

Catherine Malabou. Translated with an introduction by Carolyn Shread. Foreword by Clayton Crockett

Foreword, by Clayton Crockett
Translator's Introduction, by Carolyn Shread
Plasticity at the Dusk of Writing
Afterword: Of the Impossibility of Fleeing-Plasticity
Notes