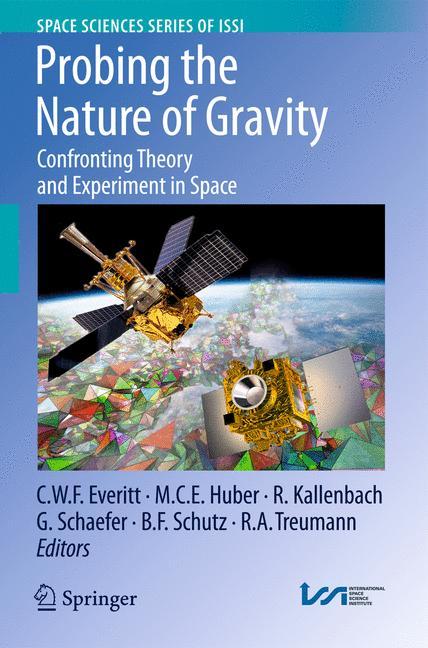 Probing the Nature of Gravity

Confronting Theory and Experiment in Space

Observing our Universe and its evolution with ever increasing sensitivity from ground-based or space-borne telescopes is posing great challenges to Fundamental Physics and Astronomy. The remnant cosmic microwave background, as beautifully measured by successive space missions COBE, WMAP, and now PLANCK, provides a unique probe of the very early stages of our Universe. The red-shift of atomic lines in distant galaxies, the dynamics of pulsars, the large scale structure of galaxies, and black holes are a few manifestations of the theory of General Relativity. Yet, today, we understand only 4% of the mass of our Universe, the rest being called dark energy and dark matter, both of unknown origin! A second family of space missions is currently emerging; rather than designing ever more re nedobservationalinstruments,physicistsandengineersseekalsotousethespaceenvironment to perform high-precision tests of the fundamental laws of physics. The technology required for such tests has become available only over the course of the last decades. Clocks of high accuracy are an example. They are based on advances in atomic and laser physics, such as cold atoms, enabling a new generation of highly sensitive quantum sensors for ground and space experiments. Two experiments in space have now tested Einstein's relativity theory: . Several decades ago, Gravity Probe A con rmed the accuracy of the gravitational red-shift ?5 according to general relativity to a level of 7× 10 [R. F. C. Vessot et al. , Test of Relativistic Gravitation with a Space-Borne Hydrogen Maser, Phys. Rev. Lett. 45, 2081-2084 (1980)].

The Confrontation Between General Relativity and Experiment.- From Classical Theory to Quantum Gravity.- Wolfgang Pauli and Modern Physics.- Gravitomagnetism in Physics and Astrophysics.- Gravity Probe B Data Analysis.- Towards a One Percent Measurement of Frame Dragging by Spin with Satellite Laser Ranging to LAGEOS, LAGEOS 2 and LARES and GRACE Gravity Models.- Lense-Thirring Precession in the Astrophysical Context.- New Frontiers at the Interface of General Relativity and Quantum Optics.- The Pioneer Anomaly in the Light of New Data.- The Puzzle of the Flyby Anomaly.- Time-Dependent Nuclear Decay Parameters: New Evidence for New Forces?.- Tests of the Gravitational Inverse Square Law at Short Ranges.- The Equivalence Principle and the Constants of Nature.- Laboratory Tests of the Equivalence Principle at the University of Washington.- Lunar Ranging, Gravitomagnetism, and APOLLO.- Atom-Based Test of the Equivalence Principle.- Testing General Relativity with Atomic Clocks.- Fundamental Constants and Tests of General Relativity-Theoretical and Cosmological Considerations.- Testing the Stability of the Fine Structure Constant in the Laboratory.- Constraining Fundamental Constants of Physics with Quasar Absorption Line Systems.- The Role of Dark Matter and Dark Energy in Cosmological Models: Theoretical Overview.- Some Uncomfortable Thoughts on the Nature of Gravity, Cosmology, and the Early Universe.- The Cosmic Microwave Background and Fundamental Physics.- Perspectives on Dark Energy.- An Assessment of the Systematic Uncertainty in Present and Future Tests of the Lense-Thirring Effect with Satellite Laser Ranging.- Misalignment and Resonance Torques and Their Treatment in the GP-B Data Analysis.- Polhode Motion, Trapped Flux, and the GP-B Science Data Analysis.- The Gravity Probe B Data Analysis Filtering Approach.- GP-B Systematic Error Determination.- Space-Time Metrology for the LISA Gravitational Wave Observatory, and Its Demonstration on LISA Pathfinder.- The Microscope Mission and Its Uncertainty Analysis.- The STEP and GAUGE Missions.- Satellite Test of the Equivalence Principle Uncertainty Analysis.- What Determines the Nature of Gravity? A Phenomenological Approach.