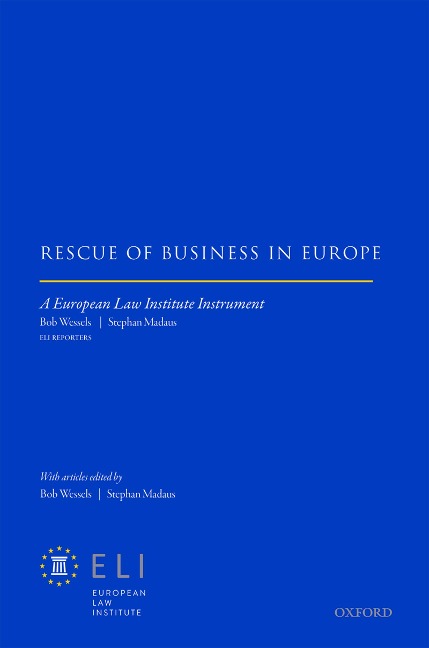 This edited volume is based on the European Law Institute's (ELI) project 'Rescue of Business in Insolvency Law'. The project ran from 2013 to 2017 under the auspices of the ELI and was conducted by Bob Wessels and Stephan Madaus, who were assisted by Gert-Jan Boon. The study sought to design (elements of) a legal framework that will enable the further development of coherent and functional rules for business rescue in Europe. This includes certain statutory
procedures that could better enable parties to negotiate solutions where a business becomes financially distressed. Such a framework also includes rules to determine in which procedures and under which conditions an enforceable solution can be imposed upon creditors and other stakeholders despite their lack
of consent. The project had a broad scope, and extended to consider frameworks that can be used by (non-financial) businesses out of court, and in a pre-insolvency context. Part I of this book, the ELI Instrument as approved by the ELI Council and General Assembly, features 115 recommendations on a wide variety of themes affected by the rescue of financially distressed businesses, such as the legal rules for professions and courts, treatment and ranking of creditors' claims, contract, corporate
and labour law as well as laws relating to transaction avoidance. Part II consists of national reports that sketch the legal landscape in 13 States and of an 'Inventory Report on International Recommendations from Standard-Setting Organisations', both of which provided insight for the drafting of
the Instrument. This volume is designed to assist those involved in a process of law reform and those setting standards for soft law in the business rescue context.

Bob Wessels is Professor Emeritus of International Insolvency Law at the University of Leiden (The Netherlands). He held that chair from 2007-2014. He has been Professor of Commercial Law at the Vrije University Amsterdam from 1988-2008. He has over 40 years of experience as an independent legal counsel and arbitrator, provided expert evidence for cases in Belgium, Greece, Ireland, Poland, Sweden, Switzerland, UK and USA, and acted as consultant to the International
Monetary Fund and the World Bank. From 1987-2016 he has been a Deputy Justice at the Court of Appeal (The Hague, The Netherlands).  He is a Fellow of the American College of Bankruptcy, member of the American Law Institute and the European Law Institute, Honorary Member of INSOL Europe and Chairman
of the Conference of European Restructuring and Insolvency Law (CERIL). Since 2010 he has been Expert Counsel to the European Commission in matters of restructuring and insolvency.

Stephan Madaus is a Professor at Martin Luther University Halle-Wittenberg (Germany), where he teaches German, European and international insolvency law as well as contract and tort law. He is a member of the International Insolvency Institute and a Founding Member of the Executive of the Conference of European Restructuring and Insolvency Law (CERIL). In 2017 he was mandated (with two colleagues) by the German Ministry of Justice to evaluate the 2012 reform of the German Insolvency Code. He
has published in prominent legal journals in Germany, Europe and beyond, including a treatise on the fundamental and doctrinal nature of rescue plans entitled Der Insolvenzplan.

Gert-Jan Boon is a researcher at the departments of Business Studies and Company Law, Leiden Law School (University of Leiden, The Netherlands). Before, he has finished masters in Marketing (Free University Amsterdam, The Netherlands) and in Corporate Law (University of Leiden, The Netherlands). He conducts research in the field of restructuring and insolvency. His research has a strong European/ international character and focuses, in particular, on international legal instruments in the area
of restructuring and insolvency. He has participated in multiple international research projects and is, among others, a Fellow of the European Law Institute, member of INSOL Europe, and member of the Business and Liability Research Network at the Leiden Law School.