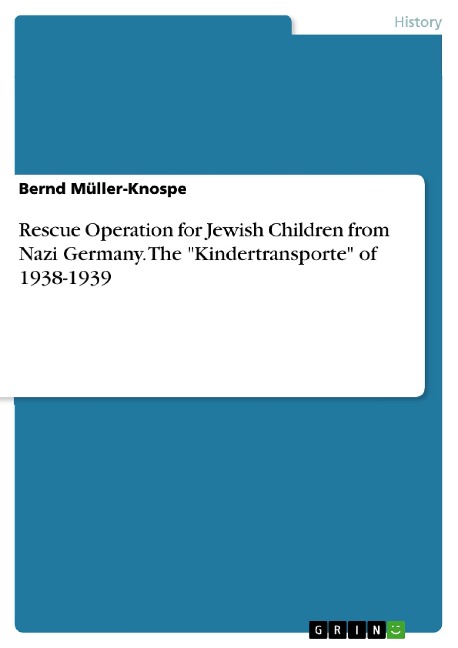 Rescue Operation for Jewish Children from Nazi Germany. The "Kindertransporte" of 1938-1939

Document from the year 2017 in the subject History Europe - Germany - National Socialism, World War II, , language: English, abstract: This paper gives a brief overview about the rescue mission for over 10.000 Jewish children before the World War II started. In April 1933, only a few weeks after the victory of the Nazi party in the general election, a call for a general boycott of Jewish businesses was issued by the Nazis. Members of the SA distributed leaflets and painted yellow Stars of David and anti-Semitic slogans on shop windows: "Germans, defend yourselves, don't buy from Jews!". Anti-Jewish legislation with the aim of completely excluding Jews from the economic, social and cultural life in Germany would soon follow.

On November 9 in 1938, open violence broke out against the Jewish population in the German Reich. These pogroms which were euphemistically called "night of broken glass", as if only a few shop windows of Jewish businesses had been broken. The Nazis wanted it to appear as an outbreak of spontaneous anger of German citizens about the murder of German diplomat Ernst vom Rath in Paris by Herschel Grynszpan, a young Jewish man on 7 November 1938 but in reality it had been meticulously prepared and organized by the Nazi administration and party organizations.

The pogroms lasted for two days, 250 synagogues were burned down as the fire brigades and police stood watching, thousands of Jewish businesses were destroyed, Jewish facilities like hospitals, schools and cemeteries were attacked and devastated, dozens of Jews were killed and thousands were humiliated and injured. After the pogroms thousands of Jewish men were arrested and sent to concentration camps, limitations on the free movement of the Jewish population became more and more severe. Jews were more or less barred from public life, children were expelled from public schools, a system of complete segregation of the entire Jewish population was introduced.