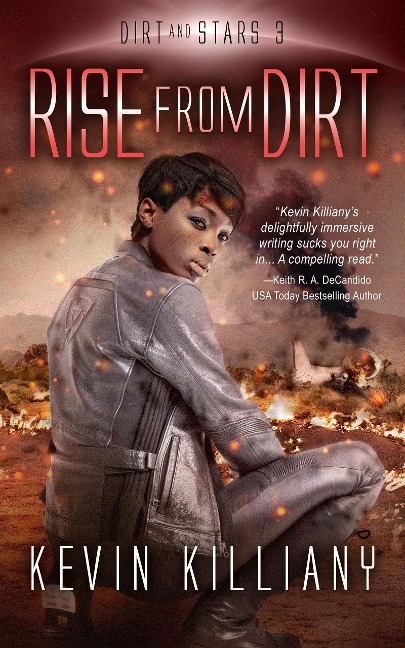 Dirt is for heroes.

"Kevin Killiany's delightfully immersive writing sucks you right into the characters, their situation, their location, and their lives. A most compelling read." ~ Keith R. A. DeCandido, Author of Novels in "Star Trek," "Supernatural," "Sleepy Hollow," and More

Mara Duval, a spacer born on Tombaugh Station, came down to Earth prepared to endure six weeks of exile on the disease-ridden, war-torn wasteland that spacers call dirt. Instead, she discovered the Space Service's stranglehold on access to space is built on lies, and people who deserve to be part of humanity's reach for the stars are denied their birthright. Mara got the word out, and for her crimes was "disappeared" without warning.

But the Space Service desperately needs people to explore and colonize the outer worlds, young people who can be molded in the spacer tradition. To attract national attention, they launch the first Boot Camp competition: a months-long contest, with the top twelve finishers earning a coveted spot in Space Service Junior Officer Training. And because of Mara, Boot Camp is open to everyone.

Jael Alden has always known her future lies among the stars-but decades of Space Service discrimination stand in her way. Boot Camp gives her a chance to take the Space Service head on, to make one of those spots her own. She doesn't care the contest will be rigged against her, designed to make all minority challengers fail. Jael has wanted the stars all her life-and she's willing to risk everything to prove the best will always rise from dirt.

I was raised in the heart of Florida in the 1950s and '60s, growing up in a pink cinderblock house in a community hemmed by orange groves against the edge of a swamp and the shore of a lake. I didn't read anything not assigned by a teacher until the summer of 1967, when an injury-the outcome of an idea that looked good at the time-laid me up for several weeks. In an effort to keep me sane my mother brought me armloads of books from the library, which I used to build forts… until the red-and-yellow cover of Have Space Suit, Will Travel lured me into looking inside. To my surprise, I read it-twice-and was hooked. In later years, I read and loved mysteries, fantasies, and historicals, but my reader's heart first imprinted on YA science fiction.

I left Florida for California in 1973, and wandered a bit before settling on North Carolina's coast. Along the way I became a husband, a father (three times), and in 2013 a grandfather. I've had a half-dozen careers in those forty years, working in education or mental health. These days, when I'm not writing I'm teaching English at a community college.

Oh, did I not mention writing? I began in 1967, right after I started reading, and-if you overlook thousands of rejections and thirty-three years of practice-was an immediate success. Since my first sale in 2000 I've sold three novels, a half-dozen novellas, and thirty-one short stories. I've also co-written or co-edited nineteen role-players' resource and rule books.

My writing is fueled by two questions: "What happened?" and "What if?" The first motivates my exploration of lesser-known history, and the second drives my speculations about how our world would be changed if we had chosen differently. From those two streams my stories flow.