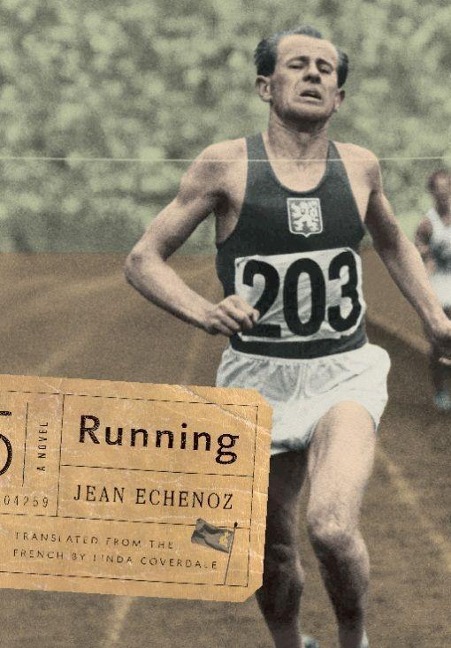 Following his brilliant portrait of Maurice Ravel, Jean Echenoz turns to the life of one of the greatest runners of the twentieth century, and once again demonstrates his astonishing abilities as a prose stylist. Set against the backdrop of the Soviet liberation and post-World War II communist rule of Czechoslovakia, Running-a bestseller in France-follows the famed career of Czech runner Emil Zátopek: a factory worker who, despite an initial contempt for athletics as a young man, is forced to participate in a footrace and soon develops a curious passion for the physical limits he discovers as a long-distance runner.

Zátopek, who tenaciously invents his own brutal training regimen, goes on to become a national hero, winning an unparalleled three gold medals at the 1952 Helsinki Olympics and breaking countless world records along the way. But just as his fame brings him upon the world stage, he must face the realities of an increasingly controlling regime.

Written in Echenoz's signature style-elegant yet playful-Running is both a beautifully imagined and executed portrait of a man and his art, and a powerful depiction of a country's propagandizing grasp on his fate.

Jean Echenoz won France's prestigious Prix Goncourt for I'm Gone (The New Press). He is the author of nine other novels in English translation-including 1914, Big Blondes, Lightning, Piano, Ravel, and Running, all published by The New Press-and the winner of numerous literary prizes, among them the Prix Médicis and the European Literature Jeopardy Prize. He lives in Paris.