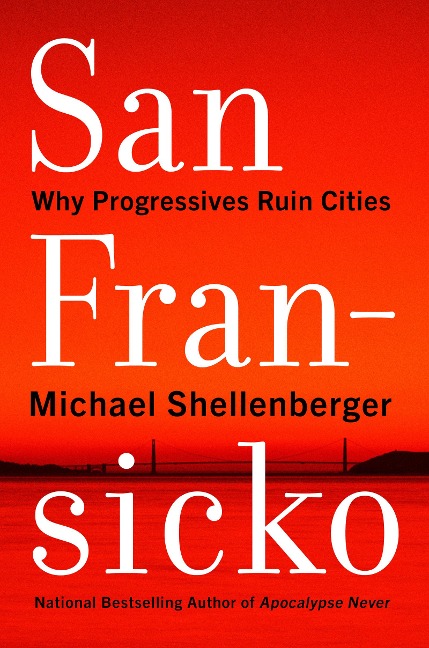 The author of the national bestseller Apocalypse Never examines the problems plaguing America's most liberal cities.

San Francisco was once widely viewed as the prettiest city in America. Today it is best known as the epicenter of the homeless apocalypse. What went wrong?

Michael Shellenberger has lived in the San Francisco Bay Area for thirty years. During that time he advocated for the decriminalization of drugs, affordable housing, and alternatives to jail and prison. But as massive, open-air drug markets spread across the state, and overdose deaths rose to over 80,000 from 17,000 in 2000, Shellenberger decided to take a deep dive into the roots of the crisis.

What he discovered shocked him. Crime, poverty, inequality—all the things decades of Democratic rule were supposed to solve. The homelessness crisis is really an addiction and mental illness crisis. The City of San Francisco and other West Coast cities — Los Angeles, Portland, Seattle—not only tolerate hard drug use, including by severely mentally ill people, they enable it. And instead of fighting crime, progressives cities allow it. Why is that?

In San Fransicko, Shellenberger reveals that the underlying problem isn't a lack of housing, money for social programs, or political will. The real problem is an ideology that designates some people as victims and others as oppressors, and insists on unequal treatment of the two. The result is an undermining of the values that make cities, and indeed civilization itself, possible.

Michael Shellenberger is a Time magazine "Hero of the Environment”; the winner of the 2008 Green Book Award from the Stevens Institute of Technology's Center for Science Writings; and an invited expert reviewer of the next Assessment Report for the Intergovernmental Panel on Climate Change (IPCC). He has written on energy and the environment for the New York Times, the Washington Post, the Wall Street Journal, Nature Energy, and other publications for two decades. He is the founder and president of Environmental Progress, an independent, nonpartisan research organization based in Berkeley, California.