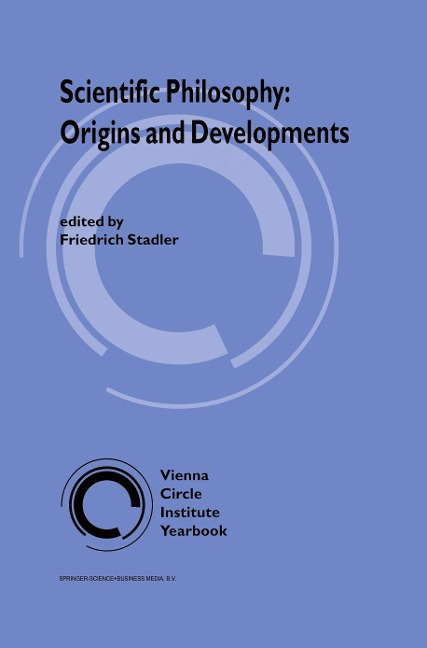 Scientific  Philosophy:  Origins and Development is the  first Yearbook of the Vienna Circle Institute, which was founded  in October 1991. The book  contains  original  contributions  to an  international symposium which  was  the  first  public event to be  organised by the Institute: `Vienna--Berlin--Prague:   The  Rise  of  Scientific  Philosophy:  The Centenaries of Rudolf Carnap, Hans  Reichenbach and Edgar Zilsel.'
The  first  section of the book - `Scientific Philosophy - Origins and  Developments'  reveals  the  extent of scientific communication in the  inter-War  years  between these great metropolitan centres, as well as  presenting   systematic  investigations  into  the  relevance  of  the  heritage of the Vienna Circle to contemporary research and philosophy.  This  section  offers  a  new  paradigm for scientific philosophy, one  which  contrasts  with  the historiographical received view of  logical empiricism.  Support  for  this re-evaluation is offered in  the second section,  which  contains,  for the first time in English  translation, Gustav   Bergmann's   recollections  of  the  Vienna  Circle,  and  an historical   study   of  political  economist  Wilhelm  Neurath,  Otto Neurath's father.
The  third  section  gives a report on current computer-based research  which  documents  the  relevance  of  Otto Neurath's `Vienna method of  pictorial  statistics',  or `Isotypes'. A review section describes new  publications  on  Neurath  and  the Vienna Circle, as well anthologies  relevant to Viennese philosophy and its history, setting them in their  wider  cultural  and  political perspective. Finally, a description is  given  of  the  Vienna  Circle  Institute and its activities since its  foundation, as well as of its plans for the future.

Editorial.  Articles: Scientific Philosophy - Origins  and Developments.  Empiricism in the Vienna Circle and in the  Berlin Society for Scientific Philosophy; C.G. Hempel.  Logical  Empiricsm and the Uniqueness of the Schlick Seminar: a Personal  Experience with Consequences; A. Naess.  Ludwig's Apple Tree: On  the Philosophical Relations between Wittgenstein and the Vienna  Circle; J. Hintikka. From the Vienna Circle to Harvard Square:  the Americanization of the European World Conception; G. Holton.  The Cultural Meaning of Aufbau; P. Galison.  The Vienna  Circle in France (1935-1937); A. Soulez. Marks and  Probabilities: Two Ways to find Causal Structure; N.  Cartwright.  From Logical Empiricism to Radical Probabilism;  R. Jeffrey.  Why the Distinction between Analytic and  Synthetic Statements? H. Lauener. Carnap and Reichenbach on  Probability with Neurath the Winner; K. Lehrer.  The Synthesis  of Logicism and Formalism in Carnap's Logical Syntax of  Language; T. Oberdan.  A New Critique of Freud's Theory of  Dreams; A. Drünbaum. Documentation. Background Study.  Research Report. Reviews. Activities of the Institut `Wiener Kreis'.  Index.