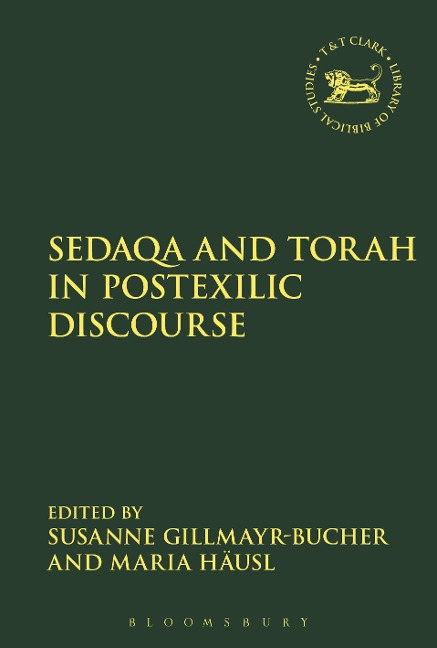 Sedaqa and Torah in Postexilic Discourse

The chapters in this volume clarify crucial aspects of Torah by exploring its relationship to sedaqa (righteousness). Observing the Torah is often considered to be the main identity-marker of Israel in the post-exilic period. However, sedaqa is also widely used as a force of group cohesion and as a resource for ethics without references to torah. The contributors to this volume explore these crucial themes for the post-exilic period, and show how they are related in the key texts that feature them.

Though torah and sedaqa can have some aspects in common, especially when they are amended by aspects of creation, both terms are rarely linked to each other explicitly in the Old Testament, and if so, different relations are expressed. These are examined in this book. The opening of the book of Isaiah is shown to integrate torah-learning into a life of righteousness (sedaqa). In Deuteronomy sedaqa is shown to refer to torah-dictacticism, and in the books of Ezra and Nehemiah torah can be understood as symbol of sedaqa meaning the disposition of each individual to accept torah as prescriptive law. However, the chapters also show that these relationships are not exclusive and that sedaqa is not always linked to torah, for in late texts of Isaiah sedaqa is not realized by torah-observance, but by observing the Sabbath.

Maria Häusl is Professor of Biblical Studies at the Technical University of Dresden, Germany.

Preface
List of contributors
List of Abbreviations
Introduction, Maria Hausl
Part One Torah and Sedaqa in the Pentateuch, the Books of Ezra and Nehemiah and the Book of Isaiah
1. Sedaqa and the Community of the Scribes in Post-Exilic Deuteronomy: A Didactical Perspective -- Kåre Berge, NLA University College, Norway
2. How Torah, Sedaqa, and Prejudice Mapped the Contours of Biblical Restoration -- Jeremiah Cataldo, Grand Valley State University, USA
3. Searching Forces of Group Cohesion in the Books of Nehemiah and Isaiah --Maria Häusl, University of Dresden, Germany
4. The Role and Function of Sedaqa and Torah in the Introduction to the Book of Isaiah (1:1-2:5) -- Alphonso Groenewald, University of Pretoria, South Africa
5. Keep Justice! (Is 56:1) - Thoughts regarding the Concept and Redaction History of a Universal Understanding of Sedaqa -- Judith Gaertner, University of Rostock, Germany
Part Two Sedaqa and Torah linked with other concepts: Holiness, Purity/Impurity and Faith
6. Purity/Impurity: Identity Marker and Boundary Maintenance in Postexilic Discourse -- Marianne Grohmann, University of Vienna, Austria
7. Ideas of the Holy. Sedaqa and Torah within a Cultic/Religious System -- Dolores Kamrada, Pázmány Péter Catholic University, Hungary
8. How is Justice Referred to Faith? Some Reflections on the Hellenistic Jewish tradition of the Reciprocal Relationship Between Obedience to Torah and Righteousness and their Reception in the New Testament with Special Focus on the Letter to the Romans. -- Christina Tuor, University of Basel, Switzerland
9. Ex 4:24-26 - The Genesis of the 'Torah' of Circumcision in Post-Exilic and Rabbinic Discourses -- Michaela Bauks, University of Koblenz, Germany
Index of References
Index of Authors

Take Off Your Pants! Outline Your Books for Fas...

The Practice of Everyday Life