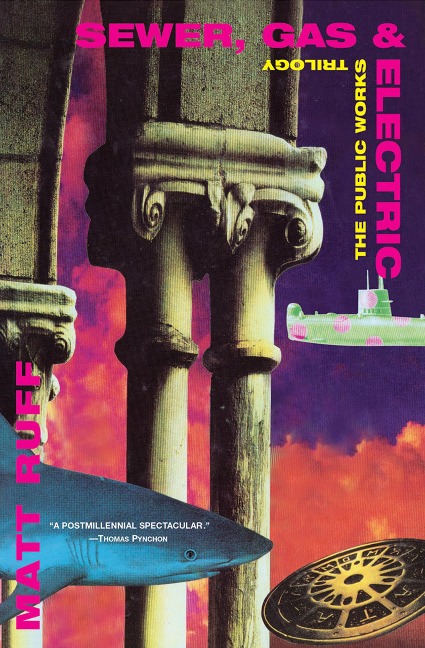 A satire of a surreal technocratic future by the national-bestselling author of Lovecraft Country: "Dizzyingly readable" (Thomas Pynchon).

High above Manhattan, android and human steelworkers are constructing a new Tower of Babel for billionaire Harry Gant, as a monument to humanity's power to dream. In the festering sewers below, a darker game is afoot: a Wall Street takeover artist has been murdered, and Gant's crusading ex-wife, Joan Fine, has been hired to find out why, in this wild romp by the acclaimed author of Fool on the Hill and Lovecraft Country.

The year is 2023, and Ayn Rand has been resurrected and bottled in a hurricane lamp to serve as Joan's assistant; an eco-terrorist named Philo Dufrense travels in a pink-and-green submarine designed by Howard Hughes; a Volkswagen Beetle is possessed by the spirit of Abbie Hoffman; Meisterbrau, a mutant great white shark, is running loose in the sewers beneath Times Square; and a one-armed 181-year-old Civil War veteran joins Joan and Ayn in their quest for the truth. All of them, and many more besides, are about to be caught up in a vast conspiracy involving Walt Disney, J. Edgar Hoover, and a mob of homicidal robots . . .

"[An] SF roller-coaster satirizing the horrors of our nascent technocracy . . . Told with breezy good humor, this exuberantly silly tale will find an audience among admirers of the day-glo surrealism of Steve Erickson and the tangled conspiracy theories of David Foster Wallace." -Publishers Weekly

Matt Ruff is the author of two other novels, Fool on the Hill and Set This House in Order: A Romance of Souls, which won the Pacific Northwest Booksellers Association Book Award and the James Tiptree, Jr. Award. He lives in Seattle, Washington, with his wife, Lisa Gold.

The Song of the Quarkbeast

Set This House in Order

Nothing But Blue Skies

The Good, the Bad and the Smug

An Orc on the Wild Side

When It's A Jar