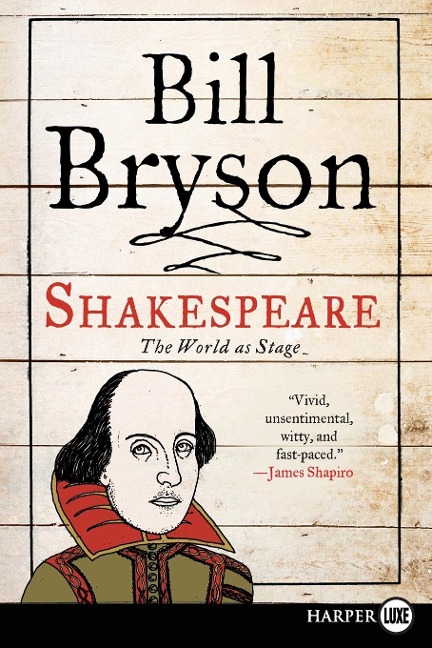 William Shakespeare, the most celebrated poet in the English language, left behind nearly a million words of text, but his biography has long been a thicket of wild supposition arranged around scant facts. With a steady hand and his trademark wit, Bill Bryson sorts through this colorful muddle to reveal the man himself.

Bryson documents the efforts of earlier scholars, from today's most respected academics to eccentrics like Delia Bacon, an American who developed a firm but unsubstantiated conviction that her namesake, Francis Bacon, was the true author of Shakespeare's plays. Emulating the style of his famous travelogues, Bryson records episodes in his research, including a visit to a basement room in Washington, D.C., where the world's largest collection of First Folios is housed.

Bryson celebrates Shakespeare as a writer of unimaginable talent and enormous inventiveness. His Shakespeare is like no one else's-the beneficiary of  Bryson's genial nature, his engaging skepticism, and a gift for storytelling unrivalled in our time.

Bill Bryson's bestselling books include One Summer, A Short History of Nearly Everything, At Home, A Walk in the Woods, Neither Here nor There, Made in America, and The Mother Tongue. He lives in England with his wife.