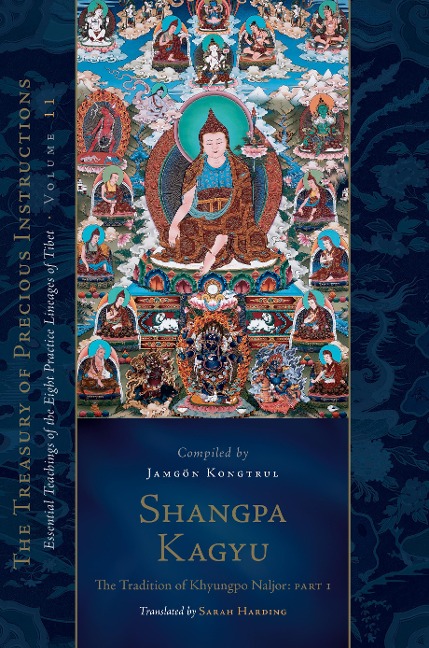 Essential Teachings of the Eight Practice Lineages of Tibet, Volume 11 (The Treasury of Precious Instructions)

A compilation of teachings and practices of the Shangpa Kagyu lineage of Tibetan Buddhism by one of Tibet's greatest Buddhist masters.

The Treasury of Precious Instructions by Jamgön Kongtrul Lodrö Taye, one of Tibet's greatest Buddhist masters, is a shining jewel of Tibetan literature, presenting essential teachings from the entire spectrum of practice lineages that existed in Tibet. Volumes in this series may be engaged as practice manuals while also preserving ancient teachings significant to the literature and history of world religions.

Volume 11 of the series, Shangpa Kagyu, is the first of two volumes that present teachings and practices from the Shangpa Kagyu practice lineage of Tibetan Buddhism. This tradition derives from the female celestial beings, or ?akinis, Niguma and Sukhasiddhi and their disciple, the eleventh-century Tibetan yogi Khyungpo Naljor Tsultrim Gönpo of the Shang region of Tibet. The scriptural source material for this practice tradition is twofold: the yogic teachings of the Six Dharmas of Niguma and the nature of mind instructions from the cycle of teachings Amulet Box Mahamudra.

The tantric basis of the Shangpa Kagyu tradition is the five principal deities of the new translation (sarma) traditions and in particular the Five-Deity Cakrasamvara practice. The six parts of this sizable volume include source scriptures, liturgies, supplications, empowerment texts, instructions, and practice manuals composed by Niguma, Virupa, Taranatha, the compiler Jamgön Kongtrul, and others.

JAMGÖN KONGTRUL LODRÖ TAYE (1813-1900) was a versatile and prolific scholar and one of the most outstanding writers and teachers of his time in Tibet. He was a pivotal figure in eastern Tibet's nonsectarian movement and made major contributions to education, politics, and medicine.

SARAH HARDING has been a Buddhist practitioner since 1974 and has been teaching and translating since completing a three-year retreat in 1980 under the guidance of Kyabje Kalu Rinpoche. She was an associate professor at Naropa University in Boulder, Colorado for twenty-five years and has been a fellow of the Tsadra Foundation since 2000.