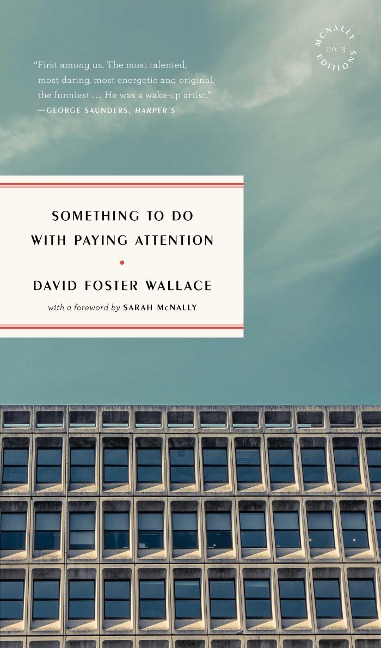 Something to Do with Paying Attention

When David Foster Wallace died in 2008, he left behind a vast unfinished novel-some 1,100 pages of loose chapters, sketches, notes, and fragments-published in 2011 as The Pale King.

But the unfinished King did contain a finished novella that Wallace had already considered publishing as a stand-alone volume. It is the story of a young man, a self-described "wastoid," adrift in the suburban Midwest of the 1970s, whose life is changed forever by an encounter with advanced tax law. It is, as Sarah McNally writes in her preface, "not just a complete story, but the best complete example we have of Wallace's late style, where calm and poise replace the pyrotechnics of Infinite Jest and other early works."

David Foster Wallace (1962-2008) was the author of two finished novels, The Broom of the System (1987) and Infinite Jest (1996), six collections of stories and essays, two book-length essays in mathematics and philosophy, and one unfinished novel, The Pale King, which was a finalist for the Pulitzer Prize.