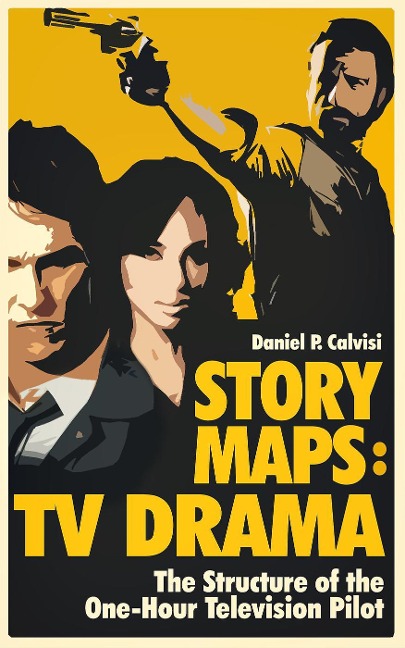 Daniel Calvisi brings his Story Maps screenwriting method to television as he breaks down the structure of the TV drama pilot, citing case studies from the most popular, ground-breaking series of recent years, including THE WALKING DEAD, GAME OF THRONES, HOUSE OF CARDS, TRUE DETECTIVE, BREAKING BAD, MR. ROBOT, SCANDAL and MAD MEN.

Story Maps: TV Drama offers the first beat sheet for television screenwriters ("Save the Cat" for TV). This is the structural template that aspiring and professional TV writers have been looking for. A clear, practical, step-by-step method to write a pilot that adheres to Hollywood standards.

How to write a TV pilot has never been easier. Writing a pilot begins here.

This book first introduces you to the key formats, genres and terminology of modern TV shows, then details the major signpost beats of a teleplay and the crucial characteristics that must be present in each act, using specific examples from our new "Golden Age of Television."

Story Maps: TV Drama has been endorsed by many INDUSTRY PROFESSIONALS in Hollywood, including:

"Story Maps: TV Drama is a handy, practical guide that walks writers through the process of creating a compelling TV drama. Using examples from some of the most respected shows on television, writers will learn to master the form from outline to Fade Out. I wish I'd had this book when I was first starting out!"
- Hilary Weisman Graham, Writer, Bones (Fox), Orange is the New Black (Netflix)

"This book blows all others out of the water! "
- Larry Reitzer, Writer, Melissa & Joey, Just Shoot Me!, Ugly Betty

"I've worked in film and television for years and I can say for certain that there is nothing else like Calvisi's book anywhere out there. His system is truly unique and breaks TV pilot structure down step-by-step, using very specific examples from some of the great pilots of recent years."
- Fritz Manger, Producer, A Deadly Adoption with Will Ferrell & Kristen Wiig

"I've turned to Calvisi for notes on several scripts in the past, and this new book is well-timed as the industry makes a huge shift toward television. This is a fantastic primer in developing a rock-solid one-hour TV pilot. I recommend this book to writers as the foundation in creating excellent story structure."
- Richard J. Bosner, Producer, Fruitvale Station, Other People, Mapplethorpe

" I have little doubt that by following Calvisi's guidelines...he can lead you to create a great pilot of your own!"
- Jenny Frankfurt, Literary Manager, High Street Management

"The bottom line is, don't learn the hard way like I did. Use Dan's book instead."
- Joe Nimziki, Director, The Howling, Outer Limits; Senior Executive, New Line Cinema, Sony Pictures

"Calvisi uses references that are current and offers clear, succinct advice. If you're thinking of writing a TV pilot, read this book first!"
- Christine Conradt, Writer/Producer/Director with over 50 produced credits

DANIEL P. CALVISI is a story analyst, screenwriter and the author of Story Maps: How to Write a GREAT Screenplay, Story Maps: TV Drama: The Structure of the One-Hour Television Pilot, Story Maps: 12 Great Screenplays, and Story Maps: The Films of Christopher Nolan. He is a former Story Analyst for major studios like Twentieth Century Fox and Miramax Films. He coaches writers, teaches webinars on writing for film and television with The Writers Store and speaks at writing conferences.

Daniel holds a degree in Film and Television from the Tisch School of the Arts at New York University. He lives in Los Angeles.

To learn more about Story Maps and how you can work with Dan, visit ActFourScreenplays.com.

All The Fucks We Give