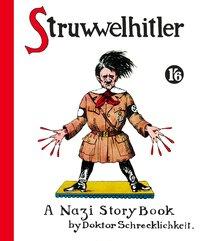 Struwwelhitler
A Nazi Story Book by Doktor Schrecklichkeit
Produced in wartime, it might have been a modest volume of
small dimensions printed on cheap paper, but it was successful
from the very start. The Struwwelhitler was published in 1941 to
raise funds for the Daily Sketch War Relief Fund, which supported
the British troops and victims of the German air raids.
The book was reprinted several times over a short period.

'Dr. Schrecklichkeit' was the pen name of Robert and Philip
Spence, who studied art in Newcastle. Later Robert Spence
joined the Royal Society of Etchers and Engravers and Philip
became a popular watercolor artist and illustrator. The
Struwwelhitler was a collaborative effort; although Robert lived
in London and Philip in Gateshead, they created it together
working in their respective homes and sending their sketches
and ideas back and forth. The work of political satire was
published in the same publishing house as the 'Daily Sketch',
an illustrated newspaper.