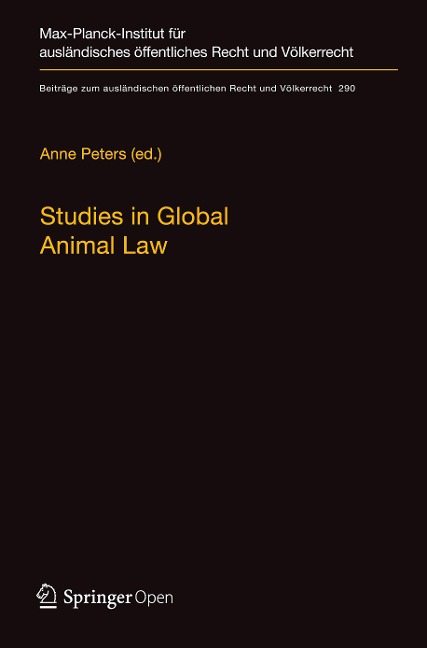 This open access book contains 13 contributions on global animal law, preceded by an introduction which explains key concepts and methods. Global Animal Law refers to the sum of legal rules and principles (both state-made and non-state-made) governing the interaction between humans and other animals, on a domestic, local, regional, and international level. Global animal law is the response to the mismatch between almost exclusively national animal-related legislation on the one hand, and the global dimension of the animal issue on the other hand.
The chapters lay some historical foundations in the ius naturae et gentium, examine various aspects of how national and international law traditionally deals with animals as commodity; and finally suggest new legal concepts and protective strategies. The book shows numerous entry points for animal issues in international law and at the same time shifts the focus and scope of inquiry.
Taschenbuch 09/2020
(0) - Geben Sie die erste Bewertung ab
kostenloser Standardversand in DE gewöhnlich ca. 4-5 Werktage (Print on Demand)

Anne Peters is Director at the Max Planck Institute for Comparative Public Law and International Law Heidelberg (Germany), and a professor at the universities of Heidelberg, Freie Universität Berlin, and Basel (Switzerland), and a William W. Cook Global Law Professor at the University of Michigan. She has been a member (substitute) of the European Commission for Democracy through Law (Venice Commission) in respect of Germany (2011-2014) and was a legal expert for the Independent International Fact-Finding Mission on the Conflict in Georgia (2009).

Introduction.- Part I: Historical Foundations.- Rights of and Over Animals in the ius naturae et gentium
(Sixteenth and Seventeenth Centuries).- On Women and Beasts: Human-Animal Relationships in Sixteenth-Century Thought.- Animal Colonialism: The Case of Milk.- Part II: Animals as Commodity.- Trading in Sacrifice.- Cross-Border Forms of Animal Use by Indigenous Peoples.- China's Legal Response to Trafficking in Wild Animals: The Relationship between International Treaties and Chinese Law.- Corruption Gone Wild: Transnational Criminal Law and the International Trade in Endangered Species.- Part III.- New Legal Concepts.-Biodiversity, Species Protection, and Animal Welfare Under International Law.- Toward International Animal Rights.- (Certified) Humane Violence? Animal Production, the Ambivalence of Humanizing the Inhumane, and What International Humanitarian Law Has to Do with It.- Part IV: New Protective Legal Strategies: Trophy Hunting, the Race to the Bottom, and the Law of Jurisdiction.- Protection of Animals Through Human Rights: The Case-Law of the European Court of Human Rights.- Challenges Regarding the Protection of Animals During Warfare.