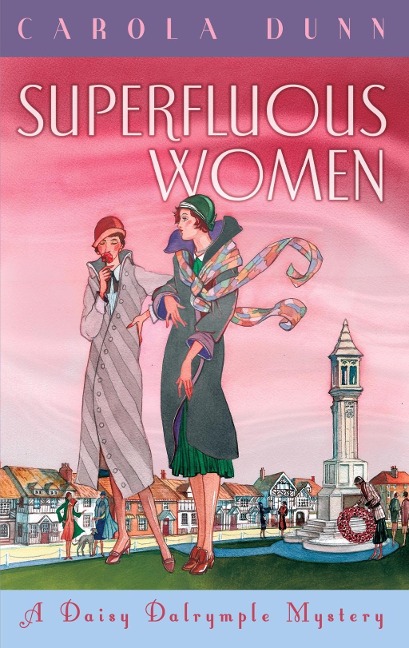 The Honorable Daisy Dalrymple-Fletcher is on a convalescent trip in the countryside, visiting old school friends. The three of them, all unmarried, have recently bought a house together. They are a part of the generation of 'superfluous women', brought up expecting marriage and a family, but left without any prospects after more than 700,000 British men were killed in the Great War.

Daisy and her husband Alec - Detective Chief Inspector Alec Fletcher, of Scotland Yard - are invited for Sunday lunch, where one of the women mentions a wine cellar below the house which remains resolutely locked. Alec picks the lock but when he eventually opens the door, what greets them is not a cache of wine, but the stench of a dead body.

And with that, what was a pleasant Sunday lunch becomes a much darker affair. Now Daisy's three friends are the suspects in a murder and her husband Alec is a witness.. So before the local detective, DI Underwood, can officially bring charges against her friends, Daisy is determined to use all her resources and skills to solve the mystery behind this perplexing locked-room crime.

Critical Praise for The Daisy Dalrymple novels by Carola Dunn:

"The period sense remains vivid, the characterizations are excellent, and the mysteries are, if anything, more perplexing than ever." The Oregonian on Rattle His Bones

"Styx and Stones is a swift, deeply enjoyable read. While Dunn's influences are many, she ultimately makes this territory her own." The Register-Guard

"Reading like an Agatha Christie thriller, Rattle His Bones is a charming look at life after the first World War." Romantic Times

"Dunn captures the melting pot of Prohibition-era New York with humorous characterizations and a vivid sense of place, and with careful plotting lays out an enjoyable tale of adventure." Publisher's Weekly on The Case of the Murdered Muckraker

Fall of a Philanderer