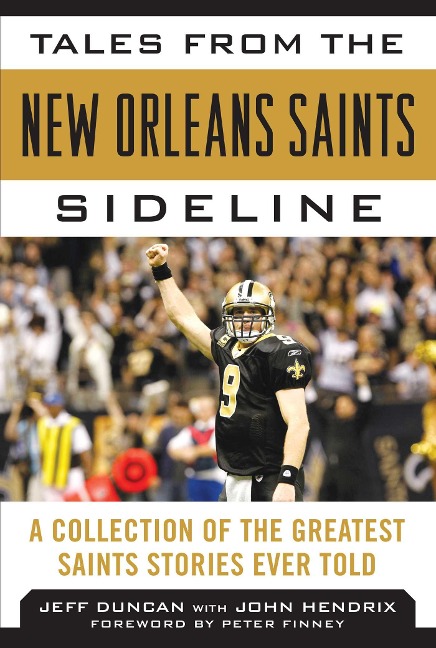 Tales from the New Orleans Saints Sideline: A Collection of the Greatest Saints Stories Ever Told

Celebrate the silver and black from the bumbling early years under freewheeling owner John Mecom, through the misguided and madcap three seasons under Coach Mike Ditka, and the return to respectability under the wise Sean Payton and the championship leadership of Drew Brees.

The New Orleans Saints own a rich history that reflects the unique character of their hometown?always colorful, sometimes sinful, and utterly unpredictable. In recent years, the Saints have shaken off their reputation as the NFL's lovable Fleur de Losers and have risen to become a dangerous gridiron competitor once again.

Despite the struggles of their early years, the Saints are adored and worshipped by their fans like few other teams in the league. Their diehard followers are resilient, passionate, and eternally optimistic. In this newly revised edition of Tales from the New Orleans Saints Sideline, author Jeff Duncan chronicles the flamboyant history of the franchise, its highs and lows, the great coaches and players, and the colorful characters that have made it one of the most interesting clubs in NFL history.

Primed and ready to achieve the glory that has thus far eluded them, the New Orleans Saints have hundreds of stories to be told, and thousands of moments to share. Now fans will relive all the greatest triumphs and most devastating defeats, and get the inside story from former Saints greats like Mora, Archie Manning, Morten Andersen, Pat Swilling, Drew Brees, and more. Without a doubt, Tales from the New Orleans Saints Sideline is a must-have for any football fan.

Jeff Duncan has covered the New Orleans Saints for the Times-Picayune since 2000. He has worked as a newspaper reporter throughout the South, including stops at the Courier-Journal, USA Today, Florida Today, and the St. Petersburg Times. His stories have won numerous national and regional awards.