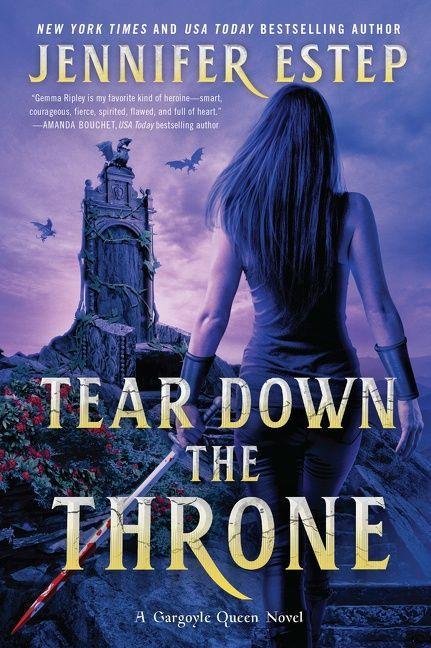 Tear Down the Throne

Bestselling author Jennifer Estep continues her Gargoyle Queen epic fantasy series where magic reigns, alliances are tested, and a dangerous attraction could tear down a throne. . .

Crown princess. Clever spy. Powerful mind magier. Gemma Ripley of Andvari is all those things?and determined to stop an enemy from using magical tearstone weapons to conquer her kingdom.

Gemma's quest for answers leads her to a trade Summit between the various kingdoms. Among the other royals in attendance is Queen Maeven Morricone of Morta and her son, Prince Leonidas?Gemma's charming and dangerous nemesis.

Gemma knows that Maeven always has a long game in motion, and sure enough, the cunning queen invokes an arcane tradition that threatens the fragile truce between Andvari and the other kingdoms. Despite her best intentions, Gemma once again finds herself thrown together with Leo and battling her growing feelings for the enemy prince.

When a series of deadly attacks shatters the Summit's peaceful negotiations, Gemma realizes that someone wants to tear the royals down from their thrones?and that this enemy just might succeed.

Jennifer Estep is a New York Times, USA Today, and international bestselling author who prowls the streets of her imagination in search of her next fantasy idea.

Jennifer is the author of the Crown of Shards, Elemental Assassin, and other fantasy series. She has written more than 35 books, along with numerous novellas and stories.

In her spare time, Jennifer enjoys hanging out with friends and family, doing yoga, and reading fantasy and romance books. She also watches way too much TV and loves all things related to superheroes.