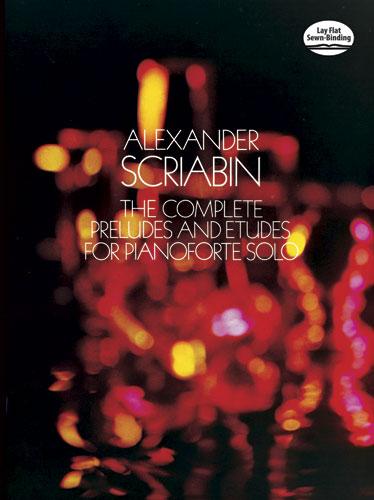 The Complete Preludes and Etudes for Pianoforte Solo

Alexander Nikolayevitch Scriabin (1872-1915), Russian composer and pianist, is best known for his perfectly spun miniatures where his novel harmonic and pianistic ideas were most brilliantly worked out. This volume in Dover's continuing series of musical scores presents the best of Scriabin's works, his complete etudes and preludes for the solo piano.
There are the Chopinesque works from his early period, including the 12 etudes from Op. 8 and the 24 Preludes, Op. 11. The works of the middle period, when he began working out his new harmonies based on a series of fourths, include the outstanding sets of Preludes, Opp. 33 and 48, and the Etudes, Op. 42. The 5 Preludes, Op. 74, and the Etudes, Op. 65, from the final period reveal perhaps most about his joyous ecstasy and languid contemplation, moods which no other composer could express to such a degree. There are also the preludes and etudes from Opp. 2, 9, 13, 15, 16, 17, 22, 27, 31, 35, 37, 39, 45, 49, 51, 59, and 67, each containing miniatures working out some subtle harmonic, rhythmic, or melodic idea with a perfect pianistic sense of writing.
This book has been especially designed as a playing edition ― the noteheads are large and easily readable at the piano, and the margins and spaces between staves are adequate for written notes, fingerings, and turnovers. It is also most useful for analysis, or simply for following along with the actual music.
E-Book 11/2012

100 Poems from the Japanese

The Mindful Way through Pregnancy