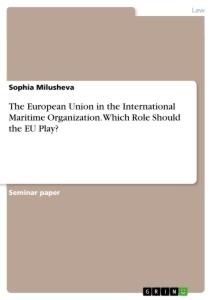 The European Union in the International Maritime Organization. Which Role Should the EU Play?

Seminar paper from the year 2020 in the subject Law - European and International Law, Intellectual Properties, grade: 19/20, Sciences Po., Paris, course: Law of external relations of the EU, language: English, abstract: It is clear to the EU that shipping is an activity of international nature that requires intensive communication between involved parties and thus cannot be managed well by a single country. Following, the increasing involvement of the EU in the IMO has to be recognized and investigated. It should be considered which role the EU should play in the IMO, and how this role and expectations thereof have evolved over the years.

To explore this, this paper firstly lays out the shipping policies of the IMO and the EU, before moving to the position that the EU holds within the IMO through its status and participation. Then, a timeline of the Commission's attempts of obtaining a full membership is explored, explaining international and Member States' responses. Finally, the paper explicitly addresses the legal challenges of reaching a full EU membership and elaborates on the duty of loyalty. The paper finds out that there are both advantages and disadvantages of an EU membership in the IMO through the Commission, and suggests that instead, a reinforced coordination between the EU and its Member States might be the better and more realistic solution for the EU/IMO relationship.

The European Union made out of its 27 Member States spreads over 70,000 km along fours seas and two oceans. 41% of the world's fleet is controlled by European companies. The EU plays a crucial role in the shipping world, and is responsible for ensuring the sustainability of the marine environment in order for its sea-related companies to be competitive and thrive.  Another entity that shares these responsibilities of "safe, secure and efficient shipping on clean oceans"  is the UN's International Maritime Organization, established in 1948. Albeit its significant role in international maritime decision-making, the EU is not a member of the IMO, as membership is reserved for states only. The EU possesses the most advanced and comprehensive regulatory framework for shipping worldwide - the 3rd Maritime Safety Package. However, internationally an opinion has been formed that the EU's approach is rather regional and unilateral and could thus possibly undermine the authority of international law.