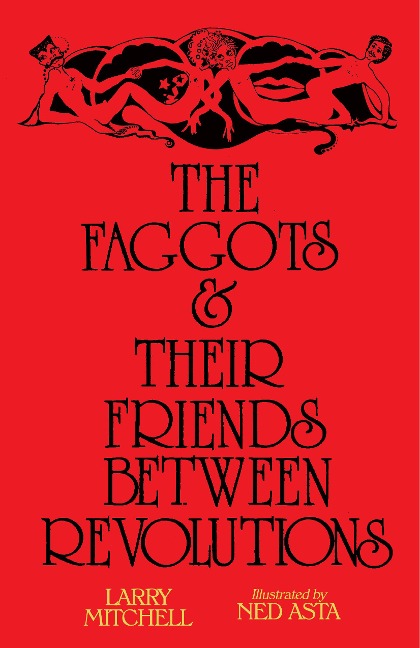 The Faggots and Their Friends Between Revolutions

The Faggots and Their Friends Between Revolutions is a beloved queer utopian text written by Larry Mitchell with lush illustrations by Ned Asta, published by Calamus Press in 1977. Part-fable, part-manifesto, the book takes place in Ramrod, an empire in decline, and introduces us to the communities of the faggots, the women, the queens, the queer men, and the women who love women who are surviving the ways and world of men. Cherished by many over the four decades since its publication, The Faggots and Their Friends Between Revolutions offers a trenchant critique of capitalism, assimilation, and patriarchy that is deeply relevant today. This new edition will feature essays from performance artist Morgan Bassichis, who adapted the book to music with TM Davy in 2017 for a performance at the New Museum, and activist filmmaker Tourmaline.

Larry Mitchell was born in 1939 in Muncie, Indiana and died of cancer in 2012 in Ithaca, New York. He is the author of many works of fiction that explored queer life and radical politics in New York City's Lower East Side and East Village in the 1980s and 90s. Mitchell founded Calamus Press, an early small press devoted to gay literature, and with Felice Picano and Terry Helbing, co-founded Gay Presses of New York in 1981. Mitchell received a PhD in Sociology from Columbia University, and was a professor at the College of Staten Island for 25 years. In addition to The Faggots and Their Friends Between Revolutions (1977), his novels include The Terminal Bar (1982), In Heat (1986), My Life as a Mole and Other Stories (1988), which won a Lambda Literary Award, and Acid Snow (1993). He helped form multiple communes, including one on Staten Island-which collectively wrote the Great Gay in the Morning: One Group's Approach to Communal Living and Sexual Politics, published in 1972 by Times Change Press-and one outside of Ithaca, NY, called Lavender Hill, which is the subject of a 2013 documentary by Austin Bunn.

Ned Asta, born in Brooklyn, New York, has been a member of the Moosewood Restaurant Collective in Ithaca, New York since 1980 and was a founding member of the Lavender Hill Commune. Asta was a member of the New York City queer theater troupe Hot Peaches in the late 1970s, and later co-founded the Breast Cancer Alliance of Ithaca, with Andi Gladstone.

Morgan Bassichis is a performer living in New York City. With TM Davy, Don Christian Jones, Michi Osato, and Una Osato, Morgan adapted Larry Mitchell and Ned Ast''s 1977 fairytale-manifesto The Faggots and Their Friends Between Revolutions for performance for the New Museum's 2017 exhibition, Trigger: Gender as a Tool and a Weapon. Morgan has presented work at MoMA PS1, the Whitney Museum, and Danspace Project, where Morgan recorded a live album concert recording called More Protest Songs! in October 2017.