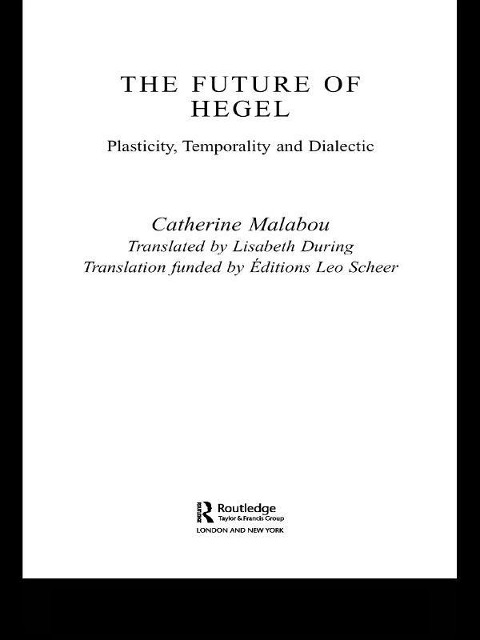 The Future of Hegel

"The Future of Hegel "is one of the most important recent books on Hegel, a philosopher who has had a crucial impact on the shape of continental philosophy. Published here in English for the first time, it includes a substantial preface by Jacques Derrida in which he explores the themes and conclusions of Malabou's book.
"The Future of Hegel: Plasticity, Temporality and Dialectic" restores Hegel's rich and complex concepts of time and temporality to contemporary philosophy. It examines Hegel's concept of time, relating it to perennial topics in philosophy such as substance, accident and the identity of the subject. Catherine Malabou also contrasts her account of Hegelian temporality with the interpretation given by Heidegger in "Being and Time," arguing that it is the concept of "plasticity" that best describes Hegel's theory of temporality. The future is understood not simply as a moment in time, but as something malleable and constantly open to change through our interpretation.
"The Future of Hegel "also develops Hegel's preoccupation with the history of Greek thought and Christianity and explores the role of theology in Hegel's thought.
Essential reading for those interested in Hegel and contemporary continental philosophy, "The Future of Hegel "will also be fascinating to those interested in the ideas of Heidegger and Derrida.

Catherine Malabou is Professor of Philosophy at the University of Paris X, Nanterre.