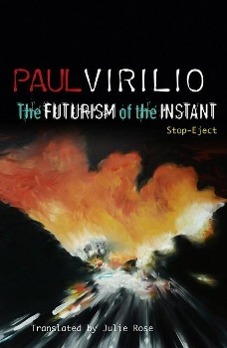 The Futurism of the Instant: Stop-Eject

With around 645 million people expected to be displaced ? by wars and other catastrophes ? by 2050, Virilio begins The Futurism of the Instant by looking at the future of human settlement and migration through the evolution of the city. What he finds is an accelerating exodus from the city as we have known it, an exodus that reverses the desertion of the countryside for the city in the past. This exodus creates a circulating city of transients on the move that will remove us further and further from our native lands en route to the ultimate exile, beyond planet Earth itself ? something the world's mad scientists have already been planning for some time.

Exploring the shifts in scale involved in such population flows and the fraught and complex relationship between sedentary settlement and globalization, Virilio considers what the resultant loss of identity might mean, not only in terms of the exhaustion of biodiversity, but also in terms of the catastrophic elimination of temporal diversity, with the compression and fragmentation of time enabled by the nanotechnologies in an ever increasing acceleration of reality. This previously unimaginable prospect is brought closer by the accident of an instant that wipes out all distinction between past, present and future within the black hole of globalized interconnectivity.