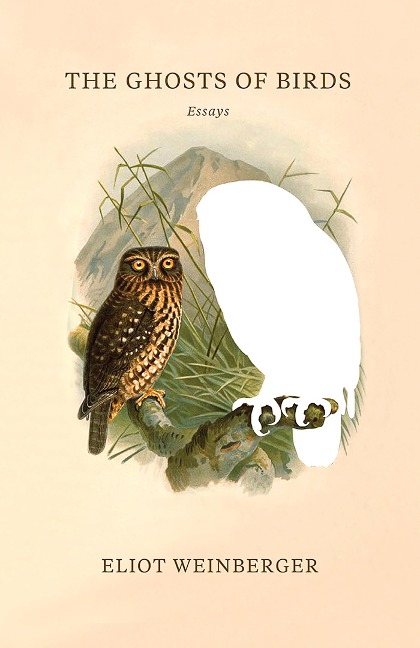 The Ghosts of Birds

A new collection from ?one of the world's great essayists? (The New York Times)

The Ghosts of Birds offers thirty-five essays by Eliot Weinberger: the first section of the book continues his linked serial-essay, An Elemental Thing, which pulls the reader into ?a vortex for the entire universe? (Boston Review). Here, Weinberger chronicles a nineteenth-century journey down the Colorado River, records the dreams of people named Chang, and shares other factually verifiable discoveries that seem too fabulous to possibly be true. The second section collects Weinberger's essays on a wide range of subjects?some of which have been published in Harper's, New York Review of Books, and London Review of Books?including his notorious review of George W. Bush's memoir Decision Points and writings about Mongolian art and poetry, different versions of the Buddha, American Indophilia (?There is a line, however jagged, from pseudo-Hinduism to Malcolm X?), Béla Balázs, Herbert Read, and Charles Reznikoff. This collection proves once again that Weinberger is ?one of the bravest and sharpest minds in the United States? (Javier Marías).
E-Book 10/2016

Eliot Weinberger is an essayist, editor, and translator. He lives in New York City.