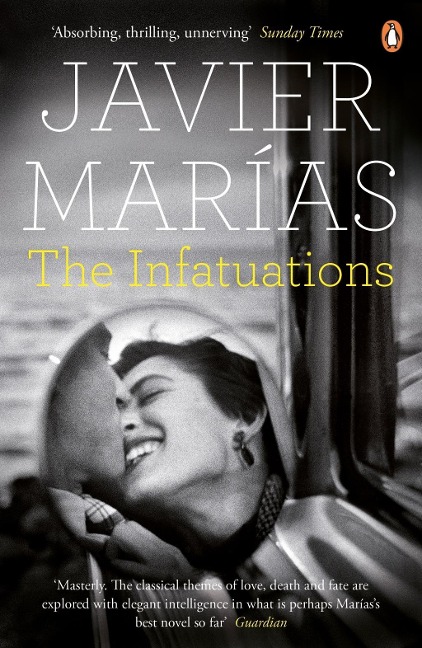 The Infatuations is a metaphysical murder mystery and a stunningly original literary achievement by Javier Marías, the internationally acclaimed author of A Heart So White and Your Face Tomorrow.

Every day, María Dolz stops for breakfast at the same café. And every day she enjoys watching a handsome couple who follow the same routine. Then one day they aren't there, and she feels obscurely bereft.

It is only later, when she comes across a newspaper photograph of the man, lying stabbed in the street, his shirt half off, that she discovers who the couple are. Some time afterwards, when the woman returns to the café with her children, who are then collected by a different man, and Maria approaches her to offer her condolences, an entanglement begins which sheds new light on this apparently random, pointless death.

With The Infatuations, Javier Marías brilliantly reimagines the murder novel as a metaphysical enquiry, addressing existential questions of life, death, love and morality.

The Infatuations is an extraordinary, immersive book about the terrible force of events and their consequences.

'I am greatly impressed by the quality of Marías's writing . . . he uses language like an anatomist uses the scalpel to cut away the layers of the flesh in order to lay bare the innermost secrets of that strangest of species, the human being' W. G. Sebald

'Years ago, I said that Marías was Spain's best living writer . . . Nothing, afterwards, has made me alter that opinion' Eduardo Mendoza, El País

''[I am] enthralled by his strange mix of made-up memories, lost experiences and real-life fantasies' Marina Warner, Guardian

Javier Marías was born in Madrid in 1951. He has published ten novels, two collections of short stories and several volumes of essays. His work has been translated into thirty-two languages and won a dazzling array of international literary awards, including the prestigious Dublin IMPAC award for A Heart So White. He is also a highly practised translator into Spanish of English authors, including Joseph Conrad, Robert Louis Stevenson, Sir Thomas Browne and Laurence Sterne. He has held academic posts in Spain, the United States and in Britain, as Lecturer in Spanish Literature at Oxford University.

Margaret Jull Costa has been a literary translator for over twenty-five years and has translated many novels and short stories by Portuguese, Spanish and Latin American writers, including Javier Marías, Fernando Pessoa, José Saramago, Bernardo Atxaga and Ramón del Valle-Inclán. She has won various prizes for her work, including, in 2008, the PEN Book-of-the-Month Translation Award and the Oxford Weidenfeld Translation Prize for her version of Eça de Queiroz's masterpiece The Maias, and, most recently, the 2011 Oxford Weidenfeld Translation Prize for The Elephant's Journey by José Saramago.

Late in the Day