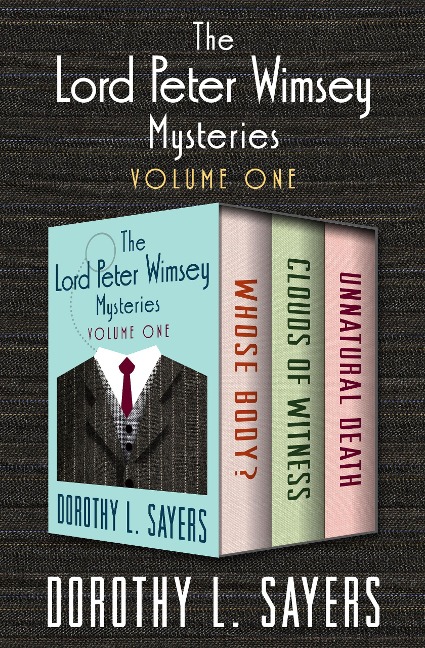 Whose Body?, Clouds of Witness, and Unnatural Death

In Whose Body?, a dead man wearing nothing but a pince-nez is found in the bathtub of an architect's London flat-and Wimsey encounters a bizarre puzzle.

Clouds of Witness brings Lord Wimsey to the family's shooting lodge in Yorkshire. Humans are not meant to be targets, but Wimsey's sister's fiancé has been felled by a bullet-and his brother accused of the crime. The investigation will bring him into contact with a socialist agitator, a hot-tempered farmer, and a host of unseemly secrets.

In Unnatural Death, everyone expected the ailing and elderly Miss Agatha Dawson to die-just not quite so soon. When the doctor who treated her shares his suspicions with Wimsey, he sets out to discover who rushed the patient to her demise.

This exciting volume of renowned author Dorothy L. Sayers's beloved cozy British mystery series is a perfect introduction for new readers, as well as a familiar friend for longtime fans.

Dorothy L. Sayers (1893-1957) was a British playwright, scholar, and  acclaimed author of mysteries, best known for her books starring the  gentleman sleuth Lord Peter Wimsey. While working as an advertising  copywriter, Sayers began writing Whose Body? (1923), the first  Wimsey mystery, followed by ten sequels and several short stories.  Sayers set the Wimsey novels between the two World Wars, giving them a  realistic tone by incorporating details from contemporary issues such as  advertising, women's education, and veterans' health. Sayers also wrote  theological essays and criticism during and after World War II, and in  1949 published the first volume of a translation of Dante's Divine Comedy.  Although she considered this translation to be her best work, it is for  her elegantly constructed detective fiction that Sayers remains best  remembered.