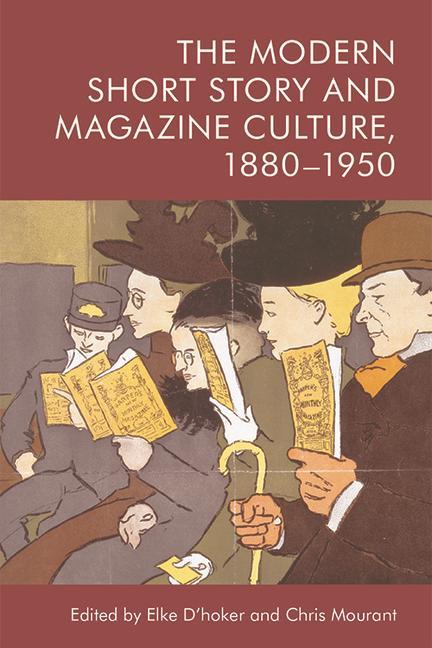 'The short story and the modern magazine grew up together, but the story of their mutual emergence has been slow to develop. At last, here is a volume that delves into this culturally vibrant symbiosis on all levels, from game-changing theoretical accounts to sharp, empirical micro-histories. This book is a must-have for short story experts and periodical studies scholars - indeed for anyone fascinated by the interactions between emerging media and cultural forms.'
Patrick Collier, Ball State University

This collection of original essays highlights the intertwined fates of the modern short story and periodical culture in the period 1880-1950, the heydays of magazine short fiction in Britain. Through case studies that focus on particular magazines, short stories and authors, chapters investigate the presence, status and functioning of short stories within a variety of periodical publications - highbrow and popular, mainstream and specialised, middlebrow and avant-garde. Examining the impact of social and publishing networks on the production, dissemination and reception of short stories, it foregrounds the ways in which magazines and periodicals shaped conversations about the short story form and prompted or provoked writers into developing the genre.

Elke D'hoker is Professor of English Literature at the University of Leuven.

Chris Mourant is Lecturer in Early Twentieth-Century English Literature at the University of Birmingham.

Elke D'hoker is Professor of English Literature at the University of Leuven, where she co-directs the Leuven Centre for Irish Studies and the modern literature research group, MDRN. She has published widely in the field of modern and contemporary British and Irish fiction, with special emphasis on the short story and women's writing. She is the author of a critical study on John Banville (Rodopi, 2004) and Irish Women Writers and the Modern Short Story (Palgrave, 2016). She has edited several essay collections, including Unreliable Narration (De Gruyter, 2008), Mary Lavin (Irish Academic Press, 2013) and The Irish Short Story (Lang, 2015).

Chris Mourant is Lecturer in Early Twentieth-Century English Literature and Co-Director of the Centre for Modernist Cultures at the University of Birmingham. He is the author of Katherine Mansfield and Periodical Culture (Edinburgh University Press, 2019) and he is an editor of the journal Modernist Cultures.

Introduction, Elke D'hoker and Chris Mourant; 1. The 'Wire-Puller': L. T. Meade, Atalanta and the Development of the Short Story, Whitney Standlee; 2. The Short Story Series of Annie S. Swan for The Woman at Home, Elke D'hoker; 3. Hubert Crackanthorpe and The Albemarle: A Study of Contexts, David Malcolm; 4. 'It is astonishing how little literature has to show of the life of the poor': Ford Madox Ford's The English Review and D. H. Lawrence's Early Short Fiction, Annalise Grice; 5. Rhythm and the Short Story, Louise Edensor; 6. For Love or Money: Popular 1920s Artists Stories in The Royal and The Strand, Emma West; 7. Fiction for the Woman of To-Day: The Modern Short Story in Eve, Alice Wood; 8. Calling Parrots in Walter de la Mare and Elizabeth Bowen: A Communion in The London Mercury, Yui Kajita; 9. Virginia Woolf and Aldous Huxley in Good Housekeeping Magazine, Saskia McCracken; 10. Virginia Woolf and the Magazines, Dean Baldwin; 11. Horizon Magazine and the Wartime Short Story, 1940-45, Ann-Marie Einhaus; 12. John Lehmann's War Effort: The Penguin New Writing (1940-50), Tessa Thorniley; 13. Voicing 'the native tang of idiom': Lagan Magazine, 1943-46, Tara McEvoy; 14. The Short Story in Wales (1937-49): 'though we write in English, we are rooted in Wales', Daniel Hughes; Bibliography; Index.