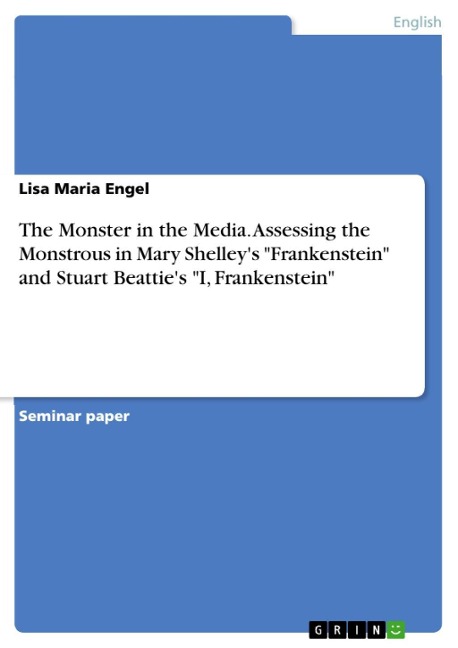 The Monster in the Media. Assessing the Monstrous in Mary Shelley's "Frankenstein" and Stuart Beattie's "I, Frankenstein"

Seminar paper from the year 2014 in the subject American Studies - Literature, grade: 1.3, University of Hamburg (Anglistik/Amerikanistik), course: Die Medialität der Monster, language: English, abstract: Using the example of Mary Shelley's "Frankenstein" (1818) and the contemporary film "I, Frankenstein" (2014), this term paper will examine the question if the way monstrosity is perceived and defined actually is influenced by and dependent on the society's value systems and anxieties. Therefore, it will be investigated what differences can be found in the portrayal of monstrosity in the 19th century novel and the contemporary film, and from what circumstances these differences might derive. In order to do so, it has to be disclosed, who or what poses as the monster in the novel and the film, and which anxieties affect the respective society. Hence, this term paper first of all provides some selected approaches to monsters and monstrosity. Next Mary Shelley's novel "Frankenstein" as well as Stuart Beattie's "I, Frankenstein" will be shortly summarized, analyzed, and compared with respect to their cultural background and the introduced criteria that form monstrosity. Finally, the findings will be summarized and evaluated with regard to the investigated questions.