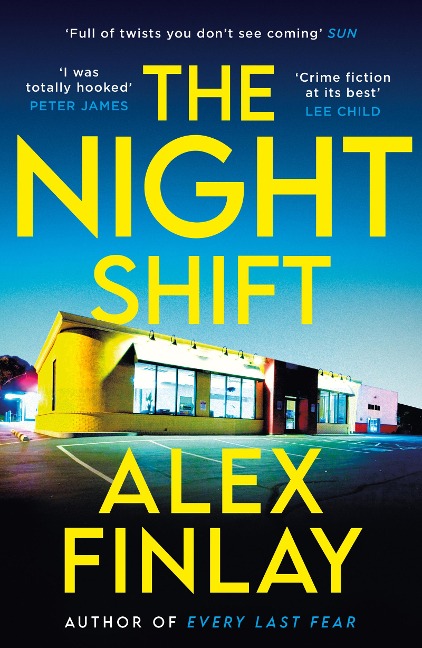 What connects a massacre at a Blockbuster video store in 1999 with the murder of four teenagers fifteen years later?

It's New Year's Eve of 1999 when four teenagers working late are attacked at a Blockbuster video store in New Jersey. Only one survives. Police quickly identify a suspect, the boyfriend of one of the victims, who flees and is never seen again.

Fifteen years later, four more teenagers are attacked at an ice cream store in the same town, and again only one makes it out alive.

In the aftermath of the latest crime, three lives intersect: the lone survivor of the Blockbuster massacre, who is forced to relive the horrors of her tragedy; the brother of the fugitive accused, who is convinced the police have the wrong suspect; and FBI agent Sarah Keller, who must delve into the secrets of both nights to uncover the truth about the Night Shift Murders...

Praise for THE NIGHT SHIFT:

'Wow, this is crime fiction at its best. Instantly immersive, pacy and propulsive, and full of surprises. Alex Finlay is the real deal, believe me' LEE CHILD

'With an unforgettable cast of characters and a plot that races through twist after twist, Alex Finlay's explosive new thriller, The Night Shift, will grab you and not let go until the final, electrifying conclusion... Fans of Riley Sager and Grady Hendrix are going to LOVE this book' JULIE CLARK, #1 internationally bestselling author of The Flight

'The Night Shift weaves together two crimes, past and present, into a fast-paced, page-turning, slam-dunk of a thriller. An exciting, entertaining read that I couldn't put down!' SAMANTHA DOWNING, #1 international bestselling author of My Lovely Wife and For Your Own Good

'In his second novel, The Night Shift, Alex Finlay takes his place in the upper ranks of thriller writers. From the very first chapter, Finlay expertly grabs the reader's attention... Filled with crisp dialogue, incredible suspense and memorable characters, The Night Shift is one not to miss. Highly recommended' BRENDAN DuBOIS, award-winning and New York Times bestselling author

'Intriguing... [ Every Last Fear] ticks all the boxes and pushes all the right buttons' THE TIMES

'Brilliant... Hooks you from the very first page and keeps you guessing until the final explosive twist. Taut, smart, and compelling. A do not miss!' LIV CONSTANTINE, internationally bestselling author

'An absolute cracker of a crime thriller... with some neat revelations and gut-churning twists along the way' SHOTS

'Hands down the best thriller I've read this year' JENNIFER HILLIER, author of the award-winning Jar of Hearts, on Every Last Fear

'Every Last Fear reads like a bullet and had me hooked from the first few brutal pages' BRIAN PANOWICH, author of the award-winning Bull Mountain

Alex Finlay lives in Washington, D.C. His 2021 breakout thriller, Every Last Fear, was an Indie Next pick, a LibraryReads selection, an Amazon Editors' Best Thriller, as well as a CNN, Newsweek, E!, BuzzFeed, Bloomberg Businessweek, Goodreads, Parade, PopSugar, and Reader's Digest best or most anticipated thriller of the year. Alex's work has been translated into more than a dozen languages and optioned for film and television.