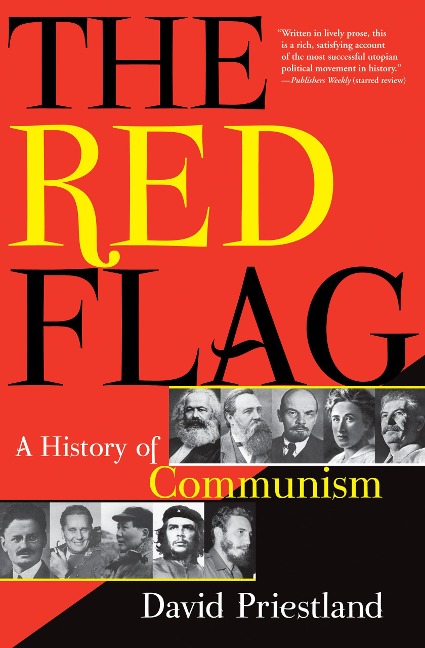 A History of Communism

If you would like a more detailed description of the book, please see the "Table of Contents" section, where there is a short summary of each chapter

This is a book by an Oxford professor that's been a long time in the making-it's been under contract for ten years-and that we're very excited about and have a deep investment in. It's a big, sweeping, incredibly ambitious book of history that tells the whole story of communism from its origins in the French Revolution with Rousseau and Robespierre all the way up to today in China and Cuba and North Korea and everything in between. We're going to publish it in November, which is the 20th anniversary of the Berlin Wall coming down, which should give us a good news peg in terms of publicity and reviews.

This book has a lot of things going for it but the biggest are probably the way it has a totally epic sweep from the 1700s onward, and its incredible cast of characters, and the way that it gives you the intellectual history of the movement-the idealogical stuff-along with the narrative of what literally happened over hundreds of years-the power struggles, the back-room stuff, the infighting-and the way that Communism affected the big picture of world history.

It is reminiscent of Niall Ferguson's new book The Ascent of Money as well as our book A Splendid Exchange because like those books this is history on a very large canvas that weaves together a lot of different threads-the ideas, the politics, the economics, the military stuff, the cultural stuff-into a compelling narrative. It's also similar to Laurence Wright's recent book The Looming Tower, which gave you the intellectual roots of Al Qaeda at the same time as it was giving you this amazing human story of what actually happened.

The author has done staggering research over the course of a decade and just puts the story together brilliantly. He brings to life Marx and Engels, who are working the intellectual angle with The Communist Manifesto and laying the foundation for Lenin and Stalin who come along to put the ideas into practice. But one thing to emphasize here is that this is not just the story of Soviet Communism. This is the whole story. You get Ho Chi Minh in North Vietnam, you get Mao and Deng Xiaoping in China, you get Castro and Che in Cuba, Tito in Yugoslavia, and dozens of others around the world. Obviously you also get Khrushchev and Kennedy and Gorbachev and Reagan and all that, but it's important to realize that it isn't just the Soviets.

What you come away with is this complete understanding of a new piece of the puzzle of humanity's ongoing struggle to govern itself and organize society and figure out how to live in the best way possible. You get the sense that Communism as it was envisioned in the early days-as a pure idea-probably wasn't any worse than Capitalism, it's just the old story of people getting involved and screwing things up with their egos and greed and hubris and insecurities-that's another similarity with The Looming Tower, where you saw how humiliation at the hands of the West drove so much of Al Qaeda's ideology. In the case of Communism, there was insecurity in these countries that the West saw them as "backward" and a lot of the terrible stuff that happened came out of a desire to prove that they weren't.

The author is a very highly regarded Oxford professor and we're going to deliver some big blurbs on this. We don't have them yet because the author just delivered but if you look at what we've done lately in terms of blurbage with these big history books, it will be similar. In terms of reviews, there's never any guarantee that we'll get them but I think we have a much better shot than we did with Old World New World, where we didn't have any kind of news peg, but with this book we will in the 20th anniversary of the Berlin Wall coming down.

Communism was one of the most powerful political and intellectual movements the world has ever seen. At the height of their influence, Communists controlled more than a third of the earth's surface. But perhaps more astonishing than its rapid rise and extraordinary reach was Communism's sudden, devastating collapse in November of 1989.

In The Red Flag, Oxford professor David Priestland tells the epic story of a movement that has taken root in dozens of countries across two hundred years, from its birth after the French Revolution to its ideological maturity in nineteenth-century Germany to its rise to dominance (and subsequent fall) in the twentieth century. Beginning with the first modern Communists in the age of Robespierre, Priestland examines the motives of thinkers and leaders including Marx, Engels, Lenin, Stalin, Castro, Che Guevara, Mao, Ho Chi Minh, Gorbachev, and many others. He also asks what it was about Communism that inspired its rank and file-whether the militants of 1920s Russia, the guerrilla fighters of China, or the students of Ethiopia-and explores the experience of what it meant to live under Communism for its millions of subjects.

He shows how Communism, in all its varieties, appealed to different societies for different reasons, in some as a response to inequalities and in others more out of a desire to catch up with the West. But paradoxically, while destroying one web of inequality, Communist leaders were simultaneously weaving another. It was this dynamic, together with widespread economic failure and an escalating loss of faith in the system, that ultimately destroyed Soviet Communism itself.

At a time when global capitalism is in crisis and powerful new political forces have arisen to confront Western democracy, The Red Flag is essential reading if we are to apply the lessons of the past to navigating the future.
E-Book 09/2018

David Priestland has studied Communism in all its forms for many years, in both Oxford and Moscow state universities. He is University Lecturer in Modern History at Oxford and a Fellow of St. Edmund Hall, and the author of Stalinism and the Politics of Mobilization.