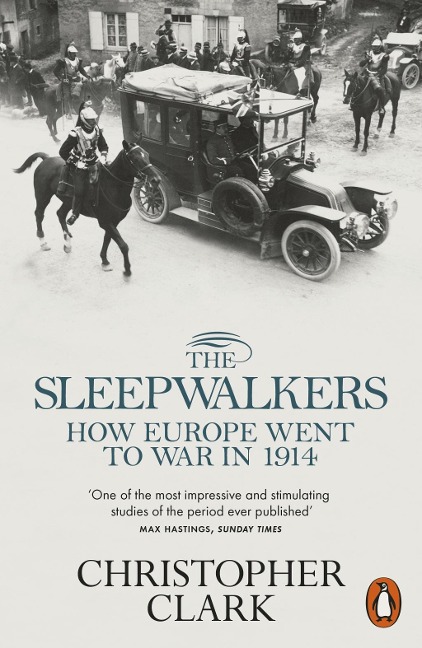 The pacy, sensitive and formidably argued history of the causes of the First World War, from acclaimed historian and author Christopher Clark

SUNDAY TIMES and INDEPENDENT BOOKS OF THE YEAR 2012

The moments that it took Gavrilo Princip to step forward to the stalled car and shoot dead Franz Ferdinand and his wife were perhaps the most fateful of the modern era. An act of terrorism of staggering efficiency, it fulfilled its every aim: it would liberate Bosnia from Habsburg rule and it created a powerful new Serbia, but it also brought down four great empires, killed millions of men and destroyed a civilization. What made a seemingly prosperous and complacent Europe so vulnerable to the impact of this assassination?

In The Sleepwalkers Christopher Clark retells the story of the outbreak of the First World War and its causes. Above all, it shows how the failure to understand the seriousness of the chaotic, near genocidal fighting in the Balkans would drag Europe into catastrophe.

'Formidable ... one of the most impressive and stimulating studies of the period ever published' Max Hastings,Sunday Times

'Easily the best book ever written on the subject ... A work of rare beauty that combines meticulous research with sensitive analysis and elegant prose. The enormous weight of its quality inspires amazement and awe ... Academics should take note: Good history can still be a good story' Washington Post

'A lovingly researched work of the highest scholarship. It is hard to believe we will ever see a better narrative of what was perhaps the biggest collective blunder in the history of international relations' Niall Ferguson

'[Reading The Sleepwalkers], it is as if a light had been turned on a half-darkened stage of shadowy characters cursing among themselves without reason ... [Clark] demolishes the standard view ... The brilliance of Clark's far-reaching history is that we are able to discern how the past was genuinely prologue ... In conception, steely scholarship and piercing insights, his book is a masterpiece' Harold Evans, New York Times Book Review

'Superb ... effectively consigns the old historical consensus to the bin ... It's not often that one has the privilege of reading a book that reforges our understanding of one of the seminal events of world history' Mail Online

'Superb ... One of the great mysteries of history is how Europe's great powers could have stumbled into World War I ... This is the single best book I have read on this important topic' Fareed Zakaria

Christopher Clark is Professor of Modern History at the University of Cambridge and a Fellow of St Catharine's College. He is the author of The Politics of Conversion, Kaiser Wilhelm II and Iron Kingdom. Widely praised around the world, Iron Kingdom became a major bestseller. He has been awarded the Officer's Cross of the Order of Merit of the Federal Republic of Germany.

A Tale of Two Cities