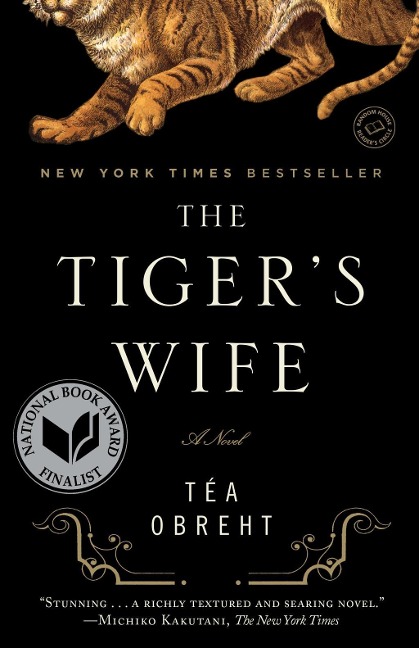 NATIONAL BOOK AWARD FINALIST • NEW YORK TIMES BESTSELLER • "Spectacular . . . [Téa Obreht] spins a tale of such marvel and magic in a literary voice so enchanting that the mesmerized reader wants her never to stop."-Entertainment Weekly

NAMED ONE OF THE TEN BEST BOOKS OF THE YEAR BY Michiko Kakutani, The New York Times • Entertainment Weekly • The Christian Science Monitor • The Kansas City Star • Library Journal

Weaving a brilliant latticework of family legend, loss, and love, Téa Obreht, the youngest of The New Yorker's twenty best American fiction writers under forty, has spun a timeless novel that will establish her as one of the most vibrant, original authors of her generation.

In a Balkan country mending from war, Natalia, a young doctor, is compelled to unravel the mysterious circumstances surrounding her beloved grandfather's recent death. Searching for clues, she turns to his worn copy of The Jungle Book and the stories he told her of his encounters over the years with "the deathless man." But most extraordinary of all is the story her grandfather never told her-the legend of the tiger's wife.

"[Obreht] has a talent for subtle plotting that eludes most writers twice her age, and her descriptive powers suggest a kind of channeled genius. . . . No novel [this year] has been more satisfying."-The Wall Street Journal

"Filled with astonishing immediacy and presence, fleshed out with detail that seems firsthand, The Tiger's Wife is all the more remarkable for being the product not of observation but of imagination."-The New York Times Book Review

"That The Tiger's Wife never slips entirely into magical realism is part of its magic. . . . Its graceful commingling of contemporary realism and village legend seems even more absorbing."-The Washington Post

Téa Obreht was born in Belgrade in the former Yugoslavia in 1985 and has lived in the United States since the age of twelve. Her writing has been published in The New Yorker, The Atlantic, Harper's, and The Guardian, and has been anthologized in The Best American Short Stories and The Best American Nonrequired Reading. She has been named by The New Yorker as one of the twenty best American fiction writers under forty and included in the National Book Foundation's list of 5 Under 35. Téa Obreht lives in New York.