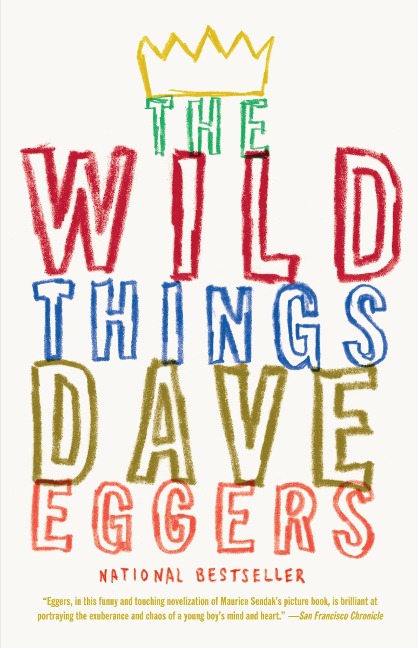 Max is a rambunctious eight-year-old whose world is changing around him: His father is absent, his mother is increasingly distracted, and his teenage sister has outgrown  him. Sad and angry, Max dons his wolf suit and makes terrible, ruinous mischief, flooding his sister's room and driving his mother half-crazy. Convinced his family doesn't want him anymore, Max flees home, finds a boat and sails away. Arriving on an island, he meets strange and giant creatures who rage and break things,  who trample and scream. These beasts do everything Max feels inside, and so, Max appoints himself their king. Here, on a magnificent adventure with these funny and complex monsters, Max can be the wildest thing of all.

In this visionary adaptation of Maurice Sendak's classic work, Dave Eggers brings an imaginary world vividly to life, telling the story of a lonely boy navigating the emotional journey away from boyhood.

Dave Eggers is the author of six previous books, including Zeitoun, winner of the American Book Award and the Dayton Literary Peace Prize. What Is the What was a finalist for the 2006 National Book Critics Circle Award and won France's Prix Medici. That book, about Valentino Achak Deng, a survivor of the civil war in Sudan, gave birth to the Valentino Achak Deng Foundation, which operates a secondary school in South Sudan run by Mr. Deng. Eggers is the founder and editor of McSweeney's, an independent publishing house based in San Francisco that produces a quarterly journal, a monthly magazine, The Believer, and an oral history series, Voice of Witness. In 2002, with Nínive Calegari he co-founded 826 Valencia, a nonprofit writing and tutoring center for youth in the Mission District of San Francisco. Local communities have since opened sister 826 centers in Chicago, Los Angeles, New York, Ann Arbor, Seattle, Boston and Washington, DC, and similar centers now exist in London (the Ministry of Stories), Dublin (Fighting Words) and in Copenhagen, Stockholm, Melbourne, and many other cities. A native of Chicago, Eggers now lives in Northern California with his wife and two children.