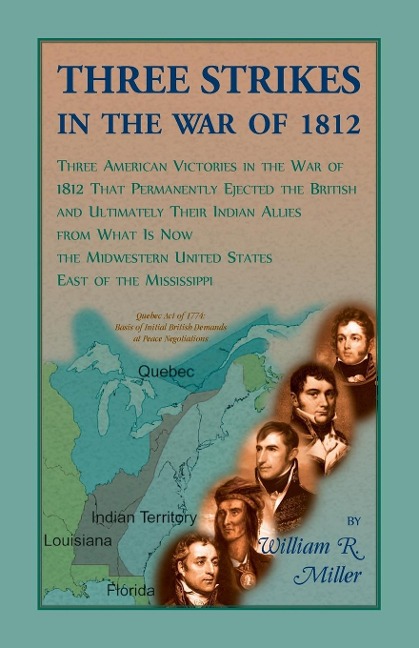 Three American Victories in the War of 1812 that Permanently Ejected the British, and Ultimately Their Native American Allies From What is Now the Midwestern United States East of the Mississippi

Too often the War of 1812 is dismissed as a tie and of little interest. That is too bad because it was actually one of the boldest gambles in the existence of the United States. In this book Miller applies his analytical skills to shed new light on, and offer insights into, what transpired in three critical, interrelated victories in the War of 1812: the Three Strikes that form the core of this book. These three, interconnected victories forced the British to abandon their military presence west of the Appalachian Mountains and south of the Great Lakes. These three victories led to the death of the key Indian leader, Tecumseh, the breakup of the Indian Confederacy and the loss of thousands of warriors as British allies. The resultant exclusion of Britain from the Great Lakes supply route led their greatest military hero, Lord Wellington, to recommend negotiations to make peace with the Americans without any territorial demands. Miller's analytic approach offers the reader a new perspective, which focuses first on an interrelated series of historical events and then analyses such concepts as causes, judgment, environment, consequences, etc. that come into play. Chapters include: The Three Primary Reasons That the U.S. Declared War on Britain; The Three Bad Assumptions Made by the U.S. President and Congress; Food, Guns and Germs; Three Strikes and the British Are Out; Luck and the Three Strikes; Three Strikes and Peace Negotiations; Postwar U.S.-British Relations; and, Long Term Strategic Consequences. A Prequel Portrait Gallery puts a human face on key players in the three actions, with a portrait and brief biographical sketch for each one. Numerous illustrations, a wealth of appendices, and a bibliography add to the value of this work.