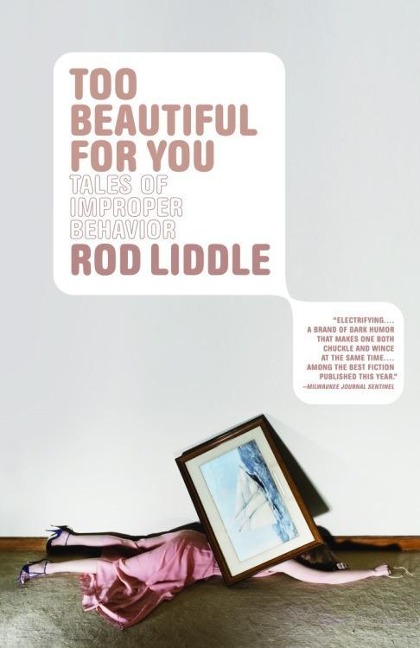 Too Beautiful for You

The tales in Too Beautiful for You, Rod Liddle's dazzling debut, sweep readers into the lives of characters whose sexual frustrations and deviant desires lead them to the very edge of acceptable behavior—and sometimes way beyond.

In a mischievous, macabre tale about a man who loses his arm in an accident on the way back from an assignation, Liddle shows just how far a husband will go to hide his infidelity from his wife. Another philandering husband, operating much closer to home, doesn't let fleeting pangs of guilt curtail his hunger for the sexual treats proffered by his mother-in-law. Bizarre happenings are not confined to the sexually adventuresome: one woman notices that her skin is hardening into a sort of insect carapace after she uses a depilatory gel; a suicide bomber is forced to acknowledge his abysmal failure as a terrorist when he tries to blow up a Jewish art gallery with a package of trout; and a man planning to jump out a window finds some of his colleagues all too ready to assist him.

Liddle presents his panoply of misfits and miscreants without passing judgment. The passions they harbor and the acts they commit may be shocking and scandalous, but Liddle shows that these hapless men and women are not so very different from the rest of us. Sharp-witted, sexy, and psychologically astute, Too Beautiful for You breaks through literary and social taboos with style and humor, reminiscent of the early work of Martin Amis.

Rod Liddle is a well-known media figure in Britain. He worked at BBC Radio's Today program and resigned amid much publicity when his bosses objected to his outspoken column in The Guardian. He is now associate editor of The Spectator and lives in South London.