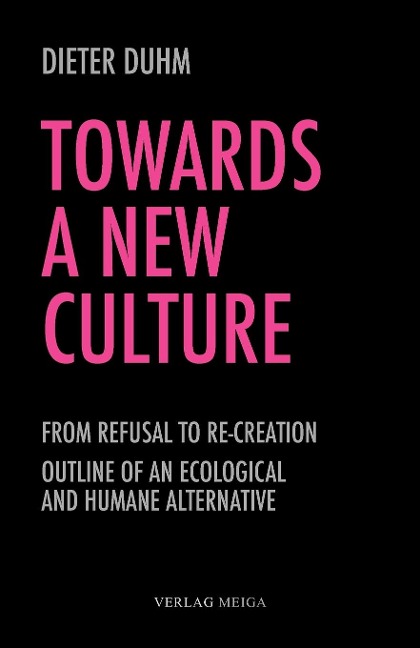 Towards a New Culture

How will life go on after the collapse of the globalised political and economic systems? How will it survive the large-scale disruption of our planet's ecological and climatic systems? And what will become of the immense systems of belief, love and thinking as they start to shake within?
The answer to these questions has to persist in the face of so many failed attempts in the past. The world stands on the brink of an abyss.
The youth from Cairo to London, from Greece to Chile, from Rothschild Avenue, Tel Aviv to Wall Street, New York are looking for new ways out of the crisis. If the mass protest and revolt movements rising up all over the world today intend to gain revolutionary power and take off together, if life is to win over violence and war, we need a direction, an image, an idea of what might be our common goal.
This book offers an idea of how a future worth living could be. It was written and published more than thirty years ago in Germany and we believe that its time has now come. We left it in the political context in which it was written. Through this we want to show that names change, yet the underlying problems remain the same... until we discover how to solve them. How this can be achieved is what this book is all about. It is more relevant today than ever.

About the Author
Dr Dieter Duhm, PhD (sociology), historian, author and psychoanalyst, was born 1942 in Berlin, Germany, and is the initiator of the "Plan of the Healing Biotopes", a plan for global peace.
In 1967 he began his engagement in the Marxist left, and went on to become one of the leading figures in the students' movement of that time. In 1972 his well-known book Angst im Kapitalismus ("Fear in Capitalism") was published, which linked the thoughts behind political revolution to the thoughts behind the liberation of the individual.
In 1975 he distanced himself from leftist dogmatism and shifted towards a more thorough human alternative. This led to the establishment of the Bauhütte project: a three year social experiment with 40 participants in the Black Forest in Germany. With the theme of "founding a community in our times" the experiment embraced the questions of the origin, meaning and aim of human existence on planet Earth. From this experiment, outlines of a new possibility of existence arose, with the concepts of "free love", "spiritual ecology", and "resonance technology".
In 1995, together with the theologian Sabine Lichtenfels and others, he founded the Tamera Peace Research Centre in Portugal, which today has more than 170 co-workers.
Dieter Duhm has dedicated his life to creating an effective forum for a global peace initiative that can match the destructive forces of capitalistic globalisation.

5 Postscript
Concerning Tradition
That All This Does Not Remain Mere Words.