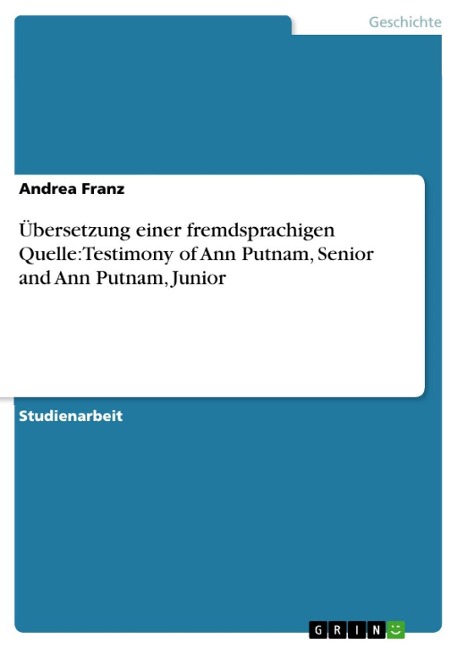 Studienarbeit aus dem Jahr 2003 im Fachbereich Geschichte - Allgemeines, Note: 2,00, Otto-Friedrich-Universität Bamberg (Institut für Geschichte), Veranstaltung: Grundkurs zu Methoden des wissenschaftlichen Arbeitens im Fach Geschichte, Sprache: Deutsch, Abstract: The deposition of Ann Putnam, the wife of Thomas Putnam, aged about 30 years, who testifieth and saith that on the 18th March 1692 , I being wearied out in helping to tend my poor afflicted child and maid, about the middle of the afternoon I lay me down on the bed to take a little rest; and immediately I was almost pressed and choked to death, that, had it not been for the mercy of a gracious God and the help of those that were with me, I could not lived many moments; and presently I saw the apparition of Martha Corey, who did torture me so as I cannot express, ready to tear me all to pieces, and then departed from me a little while; but before I could recover strength or well take breath, the apparition of Martha Corey fell upon me again with dreadful tortures, and hellish temptations to go along with her. And she also brought to me a little red book in her hand and a black pen, urging me vehemently to write in her book; and several times that day she did most grievously torture me, almost ready to kill me.
And on the 19th March, Martha Corey again appeared to me; and also Rebecca Nurse, the wife of Francis Nurse, Sr.; and they both did torture me a great many times this day with such tortures as no tongue can express, because I would not yield to their hellish temptations, that, had I not been upheld by an Almighty arm, I could not have lived (the) night. The 20th March being Sabbath- day, I had a great deal of respite between my fits. 21st March being the day of the examination of Martha Corey I had not many fits, thought I was very weak, my strength being, as I thought, almost gone.