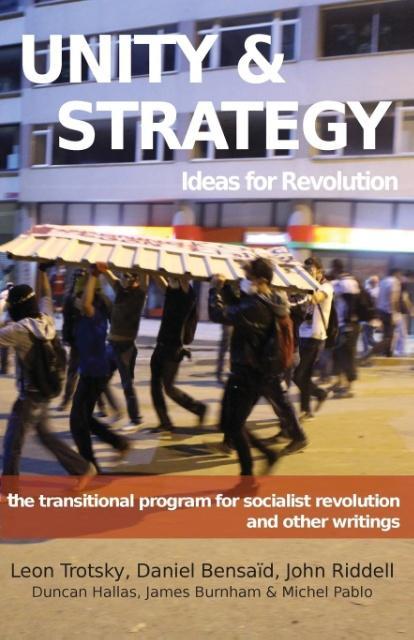 One of the major challenges for socialists is to build an anti-capitalist movement that connects daily struggles to the goal of overthrowing capitalism. Leon Trotsky was a leading marxist strategic thinker. His answer to this challenge was that socialists should build movements which unite working people around their own needs. In such movements,
socialists should urge working people to trust in their own power and formulate goals that break with capitalism.
This book contains an updated translation of the founding document of the Fourth International organised by Trotsky, The Transitional Program. In this work, Trotsky lays out his strategy for socialist revolution. The book also contains classic and contemporary articles delving into different aspects of revolutionary strategy. Together with The Transitional Program for Socialist Revolution, these documents make the book a valuable tool for activists thinking about how to defeat capitalism. Contributions by Daniel Bensaïd, Steve Bloom, James Burnham, Duncan
Hallas, Tom Kerry, Piers Mostyn, Michel Pablo, and John Riddell.

Leon Trotsky[a]  born Lev Davidovich Bronstein;[b] 7 November [O.S. 26 October] 1879 - 21 August 1940) was a Soviet revolutionary, Marxist theorist and politician whose particular strain of Marxist thought is known as Trotskyism.
Trotsky took part in the 1917 October Revolution, immediately becoming a leader within the Communist Party. He was one of the seven members of the first Politburo.[2] He was a prominent figure in the early People's Commissar for Foreign Affairs and later as the founder and commander of the Red Army.[3] After the rise of Joseph Stalin, Trotsky was removed from his positions and eventually expelled from the Soviet Union in February 1929. He spent the rest of his life in exile, and was assassinated in 1940 in Mexico City by Ramón Mercader, a Soviet agent.[4]
Trotsky's ideas developed the basis of Trotskyism, a prime school of Marxist thought that opposes the theories of Stalinism.[5][6] He was written out of the history books under Stalin and was one of the few Soviet political personalities who was not rehabilitated by the Soviet administration under Nikita Khrushchev in the 1950s.
Leon Trotsky was born Lev Davidovich Bronstein on 7 November 1879, the fifth child of a Ukrainian-Jewish family of wealthy farmers in Yanovka or Yanivka, in the Kherson governorate of the Russian Empire (now Bereslavka, in Ukraine), a small village 24 kilometres (15 mi) from the nearest post office. His parents were David Leontyevich Bronstein (1847-1922) and his wife Anna Lvovna (née Zhivotovskaya, 1850-1910). Trotsky's father lived in Poltava, and later moved to Bereslavka, as it had a large Jewish community.[7][8] The language spoken at home was a mixture of Russian and Ukrainian (known as Surzhyk).[9] Trotsky's younger sister, Olga, who also grew up to be a Bolshevik and a Soviet politician, married the prominent Bolshevik Lev Kamenev.[10]
Some authors, notably Robert Service, have claimed that Trotsky's childhood first name was the Yiddish Leiba. The American Trotskyist David North said that this was an assumption based on Trotsky's Jewish birth, but, contrary to Service's claims, there is no documentary evidence to support his using a Yiddish name, when that language was not spoken by his family.[11] Both North and Walter Laqueur in their books say that Trotsky's childhood name was Lyova, a standard Russian diminutive of the name Lev.[12] North has compared the speculation on Trotsky's given name to the undue emphasis given to his having a Jewish surname