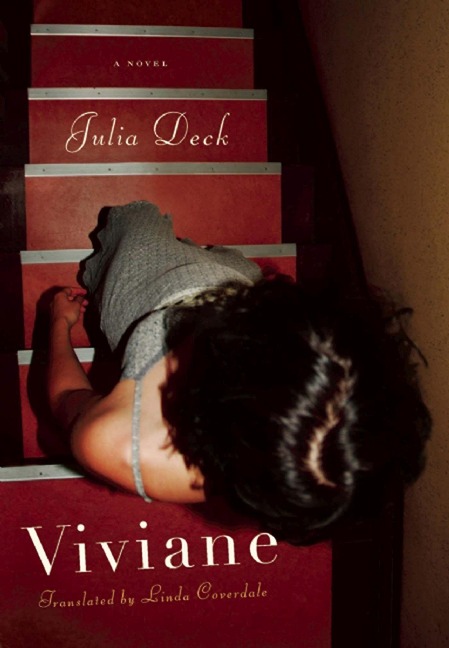 Only once in a great while does a new novel come along that takes a literary scene by storm, demonstrating real innovation in the craft of storytelling. Julia Deck provides this force in Viviane-the first debut novel in a generation to be released by the most prestigious literary publisher in Paris, Les Éditions de Minuit. This breakthrough novel-nominated for the Prix Femina, the Prix du Livre Inter, and the Prix du Premier Roman and already a bestseller in France-is sure to become a contemporary classic.

Viviane is both an engrossing murder mystery and a gripping exploration of madness, a narrative that tests the shifting boundaries of language and the self. For inspiration, Deck read the work of Samuel Beckett, because, as she says, "he positions himself within chaos and gives it coherence." How can we say that we are who we say we are? What determines our actions, and are we really responsible for them? For Viviane Élisabeth Fauville, these are not abstract questions to be left for philosophers; they will decide whether she will get away with murder.

Translated by one of the most celebrated literary translators working in French and written in irresistible, lucid prose, Viviane takes us to the knife's edge of sanity. This gem of a novel does what only great literature can do: turn us inside out.

"Written with a delirious and intimate urgency . . . A remarkable and troubling portrait of murder and madness." -Lily Tuck, National Book Award-winning author

Julia Deck was born in Paris in 1974, the daughter of a French father and a British mother. A graduate of the Sorbonne, she lives in Paris. This is her first novel. Linda Coverdale's most recent translation for The New Press was Jean Echenoz's 1914. She was the recipient of the French-American Foundation's 2008 Translation Prize and the 2004 International IMPAC Dublin Literary Award. She lives in Brooklyn.