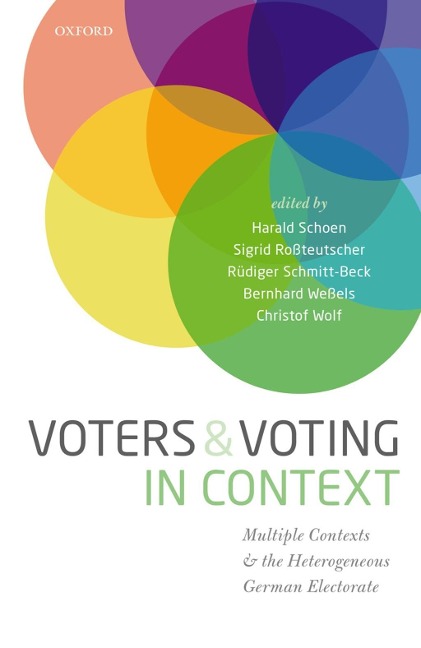 Voters and Voting in Context investigates the role of context in affecting political opinion formation and voting behaviour. Building on a model of contextual effects on individual-level voter behaviour, the chapters of this volume explore contextual effects in Germany in the early twenty-first century.

The volume draws upon manifold combinations of individual and contextual information gathered in the German Longitudinal Election Study (GLES) framework and employ advanced methods. In substantive terms, it investigates the impact of campaign communication on political learning, effects of media coverage on the perceived importance of political problems, and the role of electoral competition on candidate strategies and perceptions. It also examines the role of social and economic contexts as
well as parties' policy stances in affecting electoral turnout. The volume explores the impact of social cues on candidate voting, effects of electoral arenas on vote functions, the role of media coverage on ideological voting, and effects of campaign communication on the timing of electoral
decision-making.

Voters and Voting in Context demonstrates the key role of the processes of communication and politicization in bringing about contextual effects. Context thus plays a nuanced role in voting behaviour. The contingency of contextual effects suggests that they will become an important topic in research on political behaviour and democratic politics.

Harald Schoen is Professor of Political Science, University of Mannheim. He is one of the principal investigators of the German Longitudinal Election Study (GLES) funded by the German Science Foundation. He has widely published on political behaviour, political psychology, public opinion, and political online communication.

Sigrid Roßteutscher is Professor of Sociology in the Department of Social Sciences, Goethe University, Frankfurt am Main. Her research interests focus on politics and religion, social capital, political participation, electoral turnout, and social inequality. Her publications include  Citizenship and Democracy in an Era of Crisis (co-edited with Thomas Poguntke, Rüdiger Schmitt-Beck, and Sonja Zmerli, Routledge, 2015).

Rüdiger Schmitt-Beck is Professor of Political Science, University of Mannheim. His research focuses on electoral behaviour and political communication. His publications include  Voters on the Move or on the Run? (co-edited with Bernhard Weßels, Hans Rattinger, and Sigrid Roßteutscher, Oxford University Press, 2014)

Bernhard Weßels is a Senior Fellow at the WZB Berlin Social Science Centre and Professor of Political Science, Humboldt-University Berlin. He is one of the principal investigators of the German Longitudinal Election Study funded by the German Science Foundation, and was member of the Planning Committee of the Comparative Study of Electoral Systems (CSES) from 1998 to 2014. He has widely published on electoral behaviour, interest intermediation, and political representation nationally and
internationally. His publications include  Voters on the Move or on the Run? (co-edited with RüdigerSchmitt-Beck, Hans Rattinger, and Sigrid Roßteutscher, Oxford University Press, 2014)

Christof Wolf is President of GESIS Leibniz-Institute for the Social Sciences and Professor for Sociology, University of Mannheim. His research interests currently focus on social stratification, research methods, and research infrastructures. His publications include  The Handbook of Survey Methodology (co-edited with Dominique Joye, Tom W. Smith, and Yang-Chi Fu, Sage, 2016).