We the People: A Progressive Reading of the Constitution for the Twenty-First... – Erwin Chemerinsky | buch7 – Der soziale Buchhandel
Bitte warten ... 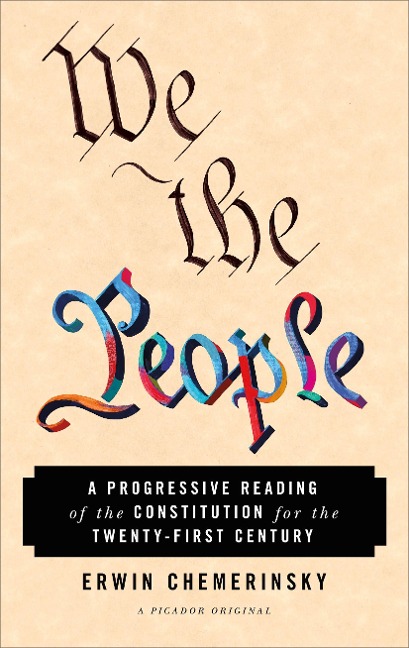 We the People: A Progressive Reading of the Constitution for the Twenty-First Century

"This work will become the defining text on progressive constitutionalism - a parallel to Thomas Picketty's contribution but for all who care deeply about constitutional law. Beautifully written and powerfully argued, this is a masterpiece." --Lawrence Lessig, Harvard Law School, and author of Free Culture

Worried about what a super conservative majority on the Supreme Court means for the future of civil liberties? From gun control to reproductive health, a conservative court will reshape the lives of all Americans for decades to come. The time to develop and defend a progressive vision of the U.S. Constitution that protects the rights of all people is now.

University of California Berkeley Dean and respected legal scholar Erwin Chemerinsky expertly exposes how conservatives are using the Constitution to advance their own agenda that favors business over consumers and employees, and government power over individual rights.

But exposure is not enough. Progressives have spent too much of the last forty-five years trying to preserve the legacy of the Warren Court's most important rulings and reacting to the Republican-dominated Supreme Courts by criticizing their erosion of rights-but have not yet developed a progressive vision for the Constitution itself. Yet, if we just look to the promise of the Preamble-liberty and justice for all-and take seriously its vision, a progressive reading of the Constitution can lead us forward as we continue our fight ensuring democratic rule, effective government, justice, liberty, and equality.

PART I: CONSERVATIVES AND THE CONSTITUTION
1. The Future of the Supreme Court and the Constitution
2. The Conservatives' False Claim of Value-Neutral Judging

Complete Text of the U.S. Constitution

The Amazing Adventures of Kavalier and Clay

The Tyranny of Merit

Paths Out of Dixie: The Democratization of Auth...

The Geometry of Holding Hands

How to Save a Constitutional Democracy

Change Everything: Creating an Economy for the ...