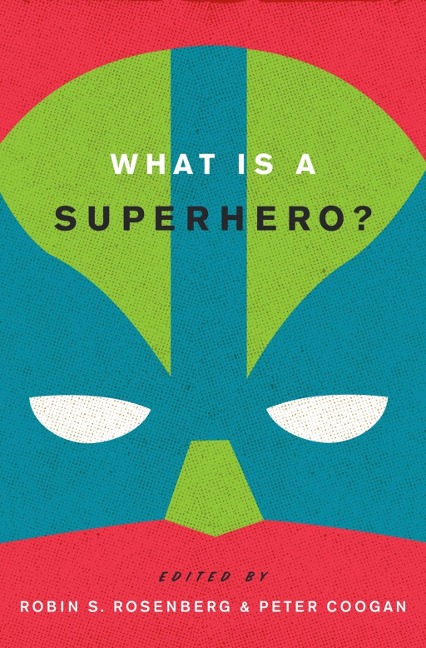 What is a Superhero?

It's easy to name a superhero--Superman, Batman, Thor, Spiderman, the Green Lantern, Buffy the Vampire Slayer, Rorschach, Wolverine--but it's not so easy to define what a superhero is. Buffy has superpowers, but she doesn't have a costume. Batman has a costume, but doesn't have superpowers. What is the role of power and superpower? And what are supervillains and why do we need them?

In What is a Superhero?, psychologist Robin Rosenberg and comics scholar Peter Coogan explore this question from a variety of viewpoints, bringing together contributions from nineteen comic book experts--including both scholars in such fields as cultural studies, art, and psychology as well as leading comic book writers and editors. What emerges is a kaleidoscopic portrait of this most popular of pop-culture figures. Writer Jeph Loeb, for instance, sees the desire to make the world a better place as the driving force of the superhero. Jennifer K. Stuller argues that the female superhero inspires women to stand up, be strong, support others, and most important, to believe in themselves. More darkly, A. David Lewis sees the indestructible superhero as the ultimate embodiment of the American "denial of death," while writer Danny Fingeroth sees superheroes as embodying the best aspects of humankind, acting with a nobility of purpose that inspires us. Interestingly, Fingeroth also expands the definition of superhero so that it would include characters like John McClane of the Die Hard movies: "Once they dodge ridiculous quantities of machine gun bullets they're superheroes, cape or no cape."

From summer blockbusters to best-selling graphic novels, the superhero is an integral part of our culture. What is a Superhero? not only illuminates this pop-culture figure, but also sheds much light on the fantasies and beliefs of the American people.

Robin S. Rosenberg is a clinical psychologist. In addition to running a private practice, she writes about superheroes and the psychological phenomena their stories reveal. She is editor of Psychology of Superheroes and Our Superheroes, Ourselves.

Peter Coogan is director of the Institute for Comics Studies, co-founder and co-chair of the Comics Arts Conference, and an instructor at Washington University in St. Louis. He holds a Ph.D. in American Studies, and authored Superhero: The Secret Origin of the Superhero, a monograph on the development, history, and functioning of the superhero genre. He is a nationally known commentator on comics and superheroes, is a semi-regular pundit on the Major Spoiler Podcast, and is co-editor of this volume.

Part I. Super and Hero: Powers and Mission

2. We Could Be Heroes
Will Brooker

3. What is a Female Superhero?
Jennifer Stuller

4. Straddling a Boundary: The Superhero and the Incorporation of Difference
Clare Pitkelthy

5. Save the Day
A. David Lewis

Part II. Context, Culture, and the Problem of Definition

7. Heroes of the Superculture
Richard Reynolds

9. The Experience of the Superhero: A Phenomenological Definition
Dana Anderson

10. What is a Superhero? No One Knows: That's What Makes 'em Great.
Geoff Klock

14. Super and Villain: A bad guy with superpowers
Chris Deis

15. Why the Villain Needs the Hero
Andrew Smith

16. Sorting Out Villainy: A Typology of Villains and Their Effects on Superheroes
Robin Rosenberg

21. The Importance of Context: Robin Hood Is Out and Buffy Is In
Kurt Busiek

22. Superheroes Are Made
Tom DeFalco