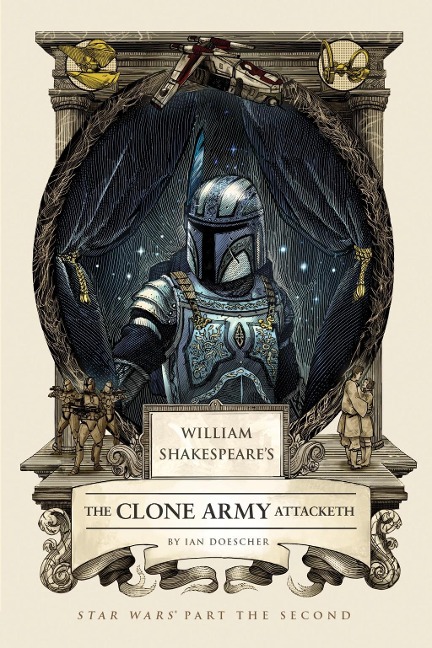 Experience the Star Wars saga reimagined as an Elizabethan drama penned by William Shakespeare himself, complete with authentic meter and verse, and theatrical monologues and dialogue by everyone from Padmé Amidala to Mace Windu.

To Shmi or not to Shmi? Torn between duty to the Jedi, attraction to Padmé, and concern for his beloved mother, yeoman Jedi Anakin Skywalker struggles to be master of his fate. The path he chooses will determine not just his own destiny, but that of the entire Republic. And thereby hangs a tale.

Authentic meter, stage directions, reimagined movie scenes and dialogue, and hidden Easter eggs throughout will entertain and impress fans of Star Wars and Shakespeare alike. Every scene and character from the film appears in the play, along with twenty woodcut-style illustrations that depict an Elizabethan version of the Star Wars galaxy.

Ian Doescher is the New York Times best-selling author of the William Shakespeare's Star Wars® series, the Pop Shakespeare series, and MacTrump. He has written for Marvel Comics and is a contributing author to the story collection Star Wars: From a Certain Point of View. He lives in Portland, Oregon, with his family. Visit him at IanDoescher.com.