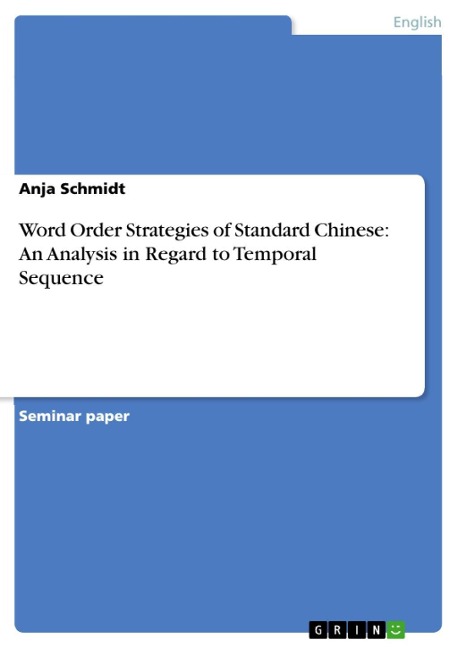 Word Order Strategies of Standard Chinese: An Analysis in Regard to Temporal Sequence

Seminar paper from the year 2004 in the subject American Studies - Linguistics, grade: 1+ (A+), University of Hamburg, course: Motivation in Language, language: English, abstract: Linguists studying the syntactic relations of Chinese have often argued that Chinese, being a non-inflectional language, was more reliant on iconic principles than most Western languages. Since Chinese is largely dependent on the use of grammatical particles and word order, it was sought to represent conceptual mappings more directly than other languages, i.e. denoting states and events as direct reflections of human perceptions. But how iconic is Chinese really? And what are the main determinants of Chinese word order?

The aim of this paper is to investigate the influence of temporal sequence on Chinese word order. I will in particular examine the pre- and post-verbal placement of adverbials and try to display the limitations of this theory. I will furthermore demonstrate how other factors can account for word order questions not sufficiently resolved by the "Principle of Temporal Sequence". Accordingly, I will try to show that not just one major parameter is involved in Chinese word order, but several - interacting to various degrees in different contexts. For this purpose, I have examined Chinese sample sentences taken from dictionaries, as well as Chinese language learning material and grammar books. My analysis was moreover verified by the intuitions of native speakers of Chinese and is only concerned with "Standard Chinese", or Putonghua (PTH) - the standardized variant of Chinese as it is used on mainland China since the 1950s. Hence, I will start this analysis with a discussion of the "Principle of Temporal Sequence", its possible means for Chinese word order and its limitations. I will then consider other influences, e.g. topicality and definiteness by examining problematic cases of word order which can otherwise not be explained thoroughly by the temporal sequence hypothesis. A brief summary will conclude this investigation, pointing to further possible determiners of Chinese word order.