You've Got to Do a Damn Sight Better than That, Buster – Hank O'Neal | buch7 – Der soziale Buchhandel
Bitte warten ... 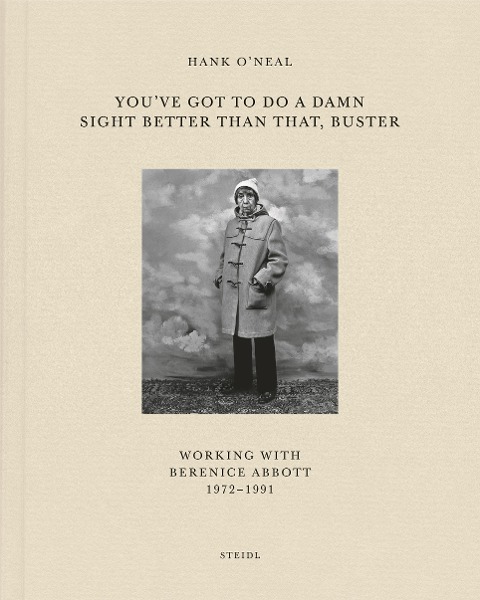 You've Got to Do a Damn Sight Better than That, Buster

Hank O'Neal met Berenice Abbott in 1972 at the coffee shop of a Holiday Inn on 57th Street in New York City. After a two-hour meeting Abbott suggested he should visit her if he was ever near Moosehead Lake in northern Maine. In the fall of 1973 O'Neal did just that, spending a long weekend with Abbott at her circa 1810 stagecoach inn. They hit it off and at the end of the stay she said, "If you ever get a real camera come up here and I'll teach you how to use it." In early 1974 he bought an 8 × 10 Deardorff camera and in the summer of that year headed back to Maine. The first and only lesson lasted about 30 minutes and Abbott told him to photograph the antique doorknocker on her front door. After almost an hour she returned to check on his progress and said, "You've got to do a damn sight better than that, buster"-not only sound advice but a great title for a book.
Abbott and O'Neal became close friends and worked together on books, exhibitions, catalogues, films, lectures, portfolios, the sale of her collection, and even social gatherings, with Abbott as maid of honor at his wedding. You've Got to Do a Damn Sight Better than That, Buster is an informal, rollicking memoir based on 19 years of personal observations by O'Neal of one of the most accomplished American artists of the twentieth century.

Born in 1940 Hank O'Neal has published more than 20 books on various subjects, mostly related to photography and music. In the early seventies he met Berenice Abbott, with whom he worked closely, as well as André Kertèsz, Walker Evans and the other living Farm Security Administration photographers who were all to influence him. O'Neal published his first book in 1973; in 1976 followed the acclaimed A Vision Shared(re-issued by Steidl in 2018). He is co-editor with Ron Kurtz of the ongoing Berenice Abbott Project at Steidl, including Berenice Abbott (2008), The Unknown Berenice Abbott (2013) and Paris Portraits 1925-1930 (2016).